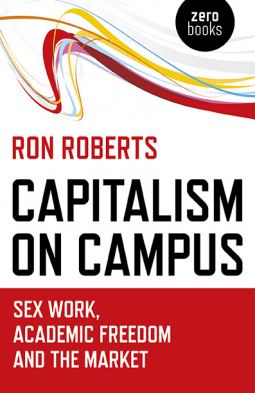 Capitalism on Campus: Sex Work, Academic Freedom, and the Market by Ron Roberts is an examination of the recent changes in British universities. Roberts is Chartered Psychologist with over thirty years experience in higher education. He has previously worked at King’s College, University College London, St Bartholomew’s Medical College, The Tavistock Institute, QMW, the University of Westminster, and Kingston University.

Higher education is making the news in the US and Britain seems to mirror the US example. In the US there is almost $1.5 Trillion in student debt the number is lower for Britain but the debt per student is higher, in fact, the highest in the world. In 1997 the average debt was under 5,000 Pounds today it is over 50,000 Pounds. The education process has become warped. No longer are universities places to encourage thinking and discovery but have become places where ratings override learning. It is seen in American public schools with standardized testing where teachers are pressed to teach students how to pass exams rather than learn. Colleges have a ranking system that is somewhat similar. The better your school the better your chances of landing a good job. The problems occur when students are coached into making the school appear better than encouraging learning. Schools are being administered by bureaucrats that care more for image than substance.

Although sex work takes the first position in the subtitle it is not the main concentration of the book. In 1970s movies occasionally a detective would be searching for the bad guy and end up in a strip club. He would talk to one of the girls and find out she was a university student, usually sociology, she would pass on the information and hint that tuition, job outlook, or some other reason forced her to work as a dancer, but she would conclude it is going to make a great thesis. Today that rarity has become much more common with an alarming amount of students who know someone involved in sex work. The internet makes it even easier today. Sex work offers a temporary, high paying job that takes less time than a traditional campus job. Also, students involved in sex work spend more time studying according to the research. Universities fight against sex work as immoral but really it has more to do with the school’s image than a students reputation.

Education has evolved from learning institutions to marketable products that care more about image and standing rather than the quality of the output. America boomed after WWII when returning GIs went to college. A higher education was the ticket out of the factory job. Today in the US education is costly and seen by many as a waste. To complicate that the factory jobs are also gone. What was once a large middle class is now an endangered species. The good paying jobs are gone and education is too expensive. Roberts’ look at the British example is scholarly. It is not light reading but more akin to a research paper. Documentation runs through the text which primary purpose is to present facts rather than deliver a smooth narrative.

One response to “Book Review — Capitalism on Campus: Sex Work, Academic Freedom, and the Market”