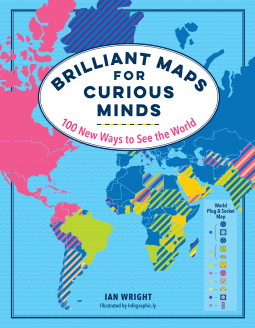 Ian Wright presents many interesting looks at our world and culture in Brilliant Maps for Curious Minds. Maps are able to convey much more meaning in a smaller space than words. Our minds seem to grasp a map of the world and we recognize Canada, China, Japan, Brazil, Australia, Great Britain, Germany, and so on. That line drawing of political borders of the world contains much more information than what readily appears. We see the lines forming the border of France and think Paris, wine, Notre Dame, Camus, Louis XIV, Napolean, and the Eiffel Tower. The simple line maps trigger shortcuts to information in our brains.

When additional information is added to the map, it becomes much more. Listing the countries that have a population smaller than Greater Tokyo would fade from memory quickly, but seeing the countries shaded in on a map leaves a much stronger impression. A simple map explains the difference between England, Great Britain, and the United Kingdom more readily than words. Sometimes maps can mislead because a three-dimensional globe cannot be made two-dimensional without losing accuracy. A set of maps here show the real size of continents against their size in commonly used Mercator Projections. Greenland is nowhere near as large as it appears and Africa is much larger. All the landmass of the world can easily fit in the Pacific Ocean.

The maps in this book explore many aspects from average female height in nations to which countries have relations with North Korea and Israel. There is also a map that displays the languages of India and the original plan for its partition. There are maps of trading partners and countries with a GPD greater than California. Wright presents an informative and entertaining look at the political, cultural, economic, and geographical aspects of our planet using only maps and legends.

I am still reading but have gotten to the point where all my mandatory reviews have been completed and I am not taking on any new material.  I will still be posting short reviews and comments on my GoodReads page  and  Twitter

Thank you for your support and visits 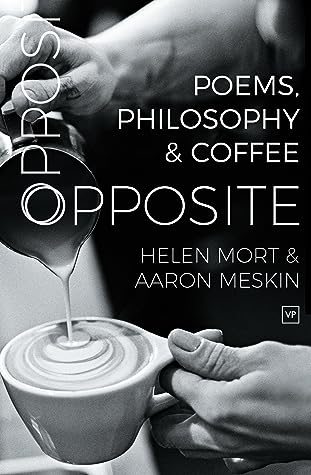 British poet Helen Mort set out to write something about poetry that many do not see or haven’t seen since the times of the ancient Greeks — the connection between poetry and philosophy. Poetry explains and examines with rhythm, rhyme, emotion, and imagery. Philosophy speaks in complex thoughts and in a language that one needs to learn much like a mathematician or a physicist. In ancient times, philosophy, theatre, and poetry shared a common root in a pantheon of gods. Today, philosophy, using the same theme, can be compared to a seminary lecture and poetry to a cathedral’s ornate stained glass windows. They both tell the same story but in a different manner.

Mort and editor Aaron Meskin exchanged philosophy papers for poetry. Mort would read an article by or from Meskin and then would try and capture its meaning in a poem. It was not always easy, and I imagine, at times unsuccessful. In this edition, Mort writes a poem and has a philosopher interpret and define it in a philosophical manner. Luckily for the reader, the philosophers keep it light enough and readable for the layman to understand. The subjects vary from motherhood to tattoos and everything between. Mort even approaches the subject of rape with the song “Chalet Lines” and how the word was made glassy and elegant and rolled smoothly like a marble. A.W. Eaton of the University of Chicago follows up Mort’s poem with art history and that a large number of paintings portraying sexual violence that are made glossy and elegant in their own way.

For lovers of poetry and philosophy, Opposite is an enjoyable read that shows there is still connectivity between the two disciplines. Mort earned her Ph.D. from Sheffield University and is the author of a novel, two poetry collections, and the editor and contributor to several poetry and literature projects. Meskin is the Professor of Philosophical Aesthetics at the University of Leeds. Biographies of the other contributors are included in the book. Coffee, well, coffee is the lubricant that keeps poets and philosophers talking, thinking, and writing.