Book Review — America and Other Fictions: On Radical Faith and Post-Religion 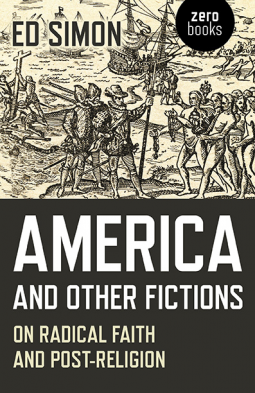 America and Other Fictions: On Radical Faith and Post-Religion by Ed Simon is a collection of essays about America and Religion. Simon is an Editor-at-Large with The Marginalia Review of Books, a channel of the Los Angeles Review of Books. A specialist in early modern literature and religion, he received a Ph.D. in English from Lehigh University.

Simon presents his views on a wide variety of subjects in this deep and dense collection of essays. Religion and America share many things in common. American History and Religious history has a take what you want and ignore what you want attitude. We think of George Washington as almost a mythical leader. Jefferson and inciteful writing are tarnished by his hypocrisy on freedom in his own life. Famous revolutionary pamphleteer Thomas Paine wrote from a simpler “American” style that spread the revolutionary zeal. His place in history is less secure as he does not have a Monticello or monument in Washington. He died alone in Greenwich Village of cirrhosis with no fanfare or much remembrance.

The topics on religion are nicely tied to politics as Agustine believing men are evil in nature and Pelagius who believed that men were naturally good. This ties in nicely with the modern conservative and liberal theories. Crucifixion is discussed and the variations of the “cross” used to inflict the punishment.

America is more than a country it is an idea that crosses borders although Americans are themselves unlikely to think of Canadians, Chilians, Peruvians, or Mexicans as Americans. American Pie, American Beauty, and American Graffiti portray additional pleasure while American Psycho and American Terror add a deeper level of violence with the addition of “American”. For those old enough to remember the Soviet Union there was a demand for Levis, Dallas videotapes, and Voice of America form people who considered America their enemy. America meant different things in different contexts.

Whitman becomes the patron saint of nineteenth-century America. It is not only his words and appreciation for the American wilderness, Whitman was not Christian but still read the Bible to wounded troops on both sides of the Civil War.  The uniform color made no difference to Whitman as they were Americans.  Reading the Bible was not for Whitman’s benefit but for the benefit of those wounded and hurting.  Bob Dylan also makes an appearance as a poet and raises questions on his winning the Nobel Poetry Prize.  How is a singer a world-class poet?  He becomes one when he embodies the spirit of America.

Simon writes a complex mix of subject matter and thoughts.  It is not a light afternoon read but something that needs to be thought upon and processed.  The information is densely packed and takes much from philosophy, religious and otherwise, to present a picture of America and Christianity without combining the two.  A thought-provoking and interesting study of the two ideas.