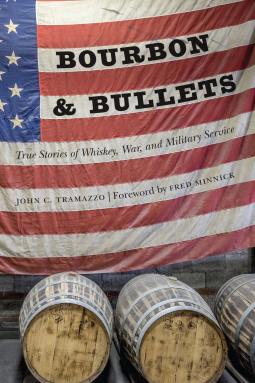 Bourbon and Bullets: True Stories of Whiskey, War, and Military Service by John C. Tramazzo is a history of whiskey and the American military. Tramazzo is an active duty Army officer and veteran of several deployments in support of the Global War on Terror. He is also an American whiskey enthusiast, Kentucky Colonel, and the founder of the popular blog bourbonscout.com.

For all the Puritan roots of America, it certainly has ties to vice. Tobacco funded the revolution and whiskey help the soldiers keep up the fight. Rum was America’s first drink. America’s ports, Africa, and the Caribean made a self-feeding triangle. America bought the molasses for rum, which paid for the slaves, who worked the sugar plantations. English pressure on American ports caused America to look inward for its fermentable materials — corn and rye. America made whiskey and whiskey was the reason that a sitting president led American troops into battle– Washington and the Whiskey Rebellion. The Whiskey Tax was a large source of revenue for the new government and when distillers refused to pay the tax it created a financial crisis.

Whiskey was carried into every battle from the Revolution War to Vietnam. Middle East Wars had to rely on the cleverness of military members to sneak whiskey into that theater. Tramazzo presents the history of whiskey and its relation to the American military. There were times when food for troops was scarce but whiskey was still available. It was the one ration that no one wanted to lose. World War I troops returning from were one of the biggest groups and vocal groups against Prohibition. Marines in WWII strained hair tonic through bread to make their own battlefield whiskey.

Whiskey, Bourbon, was America’s drink; its roots were a tribute to France who was ruled by the House of Bourbon. Louisville, Kentucky was named after the king. Bourbon is a whiskey made from a minimum of 51% corn. Other whiskey’s use rye and wheat (Maker’s Mark) as primary ingredients. Whiskey was America’s liquor of choice from the revolution to Vietnam. Rebellion against the establishment turned many away from whiskey and to light liquors. Ironically in 1976 vodka sales exceded whiskey sales in the US. America’s celebration of 200 years of independence was marked by the embrace of our Cold War enemy’s drink. Whiskey made a comeback in the early 1980s with single barrel whiskeys.

Many popular brands have their ties back to veterans. Jack Daniels fought in the Civil War. Bulleitt, Van Winkle, and Stagg all experienced combat before becoming whiskeys. Civil War veteran Paul Jones is credited with Four Roses Whiskey. Veteran and American President Harry Truman began each day with a power walk and a shot of bourbon. His choice was Old Grand Dad. Navy veteran and President Jimmy Carter was visited by a wild turkey that just happened to fly into the White House grounds. The turkey was most likely from Dick Newman the marketing director for Wild Turkey.

In addition to the history of whiskey in the United States,  Tramazzo concentrates on the veterans who continue and continued the whiskey tradition. The US military purchases more Jack Daniels single barrel whiskey than any other group.  The tie between the men in uniform, and those who have served, and whiskey is undeniable.