Book Review — New Atlantis and The City of the Sun: Two Classic Utopias 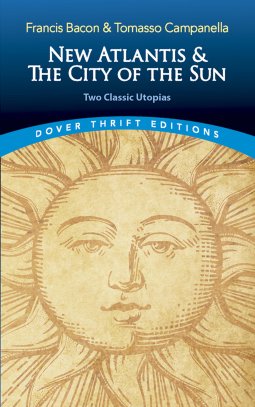 New Atlantis and The City of the Sun: Two Classic Utopias By Francis Bacon and Tommaso Campanella (respectively) are two stories of utopian societies. Bacon was an English philosopher, statesman, scientist, jurist, orator, and author. He served both as Attorney General and as Lord Chancellor of England. He is perhaps best known as an advocate of the scientific method. Campanella, was a Dominican friar, Italian philosopher, theologian, astrologer, and poet. He is probably best known for his written defense of Galileo which landed him in prison for heresy.

These works are important in that they represent early fiction with a political or moral message. Today these would fall under the broad category of speculative fiction. In the early 17th Century there was no such classification. These two utopia’s share a few similar traits of being isolated from the rest of the world and a Christian (or Christianlike) foundation. In Bacon’s unfinished book, the society lives on an island outside of the sea lanes of the time and is stumbled upon by several English ships sailing from Peru. Campanella’s utopia is located on an isolated island where everything is perfect from weather to the land.  Campanella’s story is told as a dialog in the Platonic tradition.

Both societies although religious have used science, and the scientific method to expand their knowledge and technology. Their inventions today seem unimaginative, like a ship that can sail without wind or sails, but for the early 17th century this seemed impossible. Bacon’s utopia is strictly structured while Campanella’s resembles a perfect communist state with goods, as well as women and children held in common. Knowledge is painted on the many walls to make it available to everyone.

Dover Thrift, again, brings a quality product at a fair price the $4.00 paperback is well worth the cost of the two stories.  This edition also comes with a foreword and an introduction by Gregory Claeys of Royal Holloway, University of London.  Recommended for those with an interest in 17th-century writing or speculative fiction.