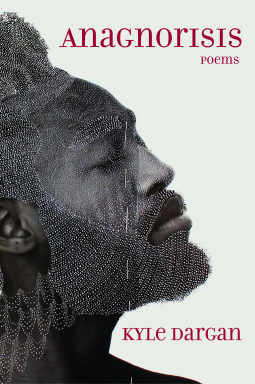 Anagnorisis: Poems by Kyle Dargan is a collection of poetry, in part, focusing on being African-American in today’s America. Dargan is the editor and founder of POST NO ILLS magazine and an associate professor of literature and creative writing at American University. He earned his BA from the University of Virginia and MFA from Indiana University, where he was a Yusef Komunyakaa fellow and poetry editor of the Indiana Review.

A powerful and moving collection of poetry that begins with a focus of being black in America. From the opening Richard Pryor line of the first Africans in America to what change can be expected when you put a black man in the White House, Dargan focuses on race in America and legacy. The opening salvo is from a poem titled “Failed Sonnet After the Verdict” reflecting on the Zimmerman verdict and immediately follows up with the Obama presidency with “Avenger”:

Behind 1600’s gates, the President sits bound
to the presidency like a superhero sidekick,
his mouth gagged by what “originalists” believe
the constitution says. Live streams, meanwhile,
pump night-­green footage from Ferguson’s
punctured lung into our timelines. Flash
grenades gush like stars spangling from a flag
drawn and quartered.
….

Somewhere is the negro’s imagined America,
where we have Iron Man on our side,
though it does not matter if the hero is “black”
so long as the body inside is. But super suits
and costumes don’t function like the Oval
Office. Vote a “black” man into a white house.
It’s still the White House—symbol of everything
we’ve been escaping—not a beacon, never rescue

Voice against the system or perhaps more commonly called the Resist movement is a common theme. Dargan joins the poets and artists resisting with words and art in his commanding couplet poem, “Poem Resisting Arrest” :

This poem will be guilty. It assumed it retained
the right to ask its question after the page

came up flush against its face.

The power of the early poems is followed up by a prose poem “Lost One” relaying personal experiences with what has been making the news. Dargan’s next section of poetry centers on working in China, the difference in the peoples perspective, and his attempt to fit in. The pollution, the language barriers, and the people offer a different setting, yet there is no racism in a society that he is clearly an outsider. The collection closes with a section entitled “Dear Echo” which is much more reflective than the previous sections. Although starting with a poem about guns he quickly moves into nature, rain and dragonflies, and finally settles with the natural future of Earth.

Powerful, contrasting, current, assertive, and reflective this collection speaks volumes on America and man.  Anagnorisis is a collection that lives up to its name.