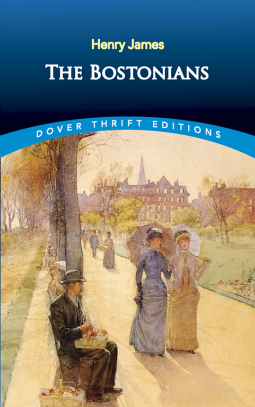 Henry James’ The Bostonians takes place in Boston a decade after the Civil War. Basil Ransom and Mississippian and a former Confederate officer who now works in New York City as a lawyer plays a central role in the triangle of characters. The story begins as he visits his cousin Olive Chancellor in Boston. Olive is involved in the women’s rights movement and a member of Boston Society. During his visit, he attends a meeting with his cousin and falls in love with the voice of the speaker, Verena Tarrant. Olive sees Verena as the future of the women’s movement. Basil, disagrees with Verena’s politics but is drawn to her. Olive and Basil compete for Verena throughout the novel. The triangle that forms is not strictly platonic.

The Bostonians and Henry James not only provides a bridge from realism to modernism it also opened the door for other works like The Well of Loneliness. It is also the origin of the term “Boston marriage”. The book did not fair well with American critics as it was suggested the characters were based off real people. Written as satire, the book holds up well today, and maybe better than it was received at publication. The exaggerated character of Basil seems to be something of a caricature of a rich southerner and likewise Olive that of a highbrow Yankee.

The Dover Thrift Edition of this work is a quality paperback for $7.00 and less than a dollar Kindle ebook. For those interested in historical satire and over the top characters this is the book for you.