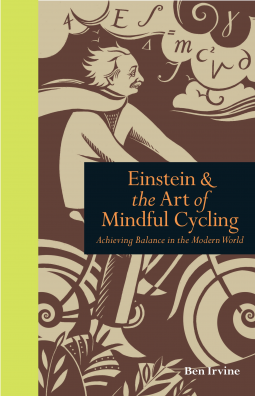 Einstein & The Art of Mindful Cycling: Achieving Balance in the Modern World by Ben Irvine is a side by side look at the father of Relativity and the simplest machine used for travel. Irvine is a writer, publisher, campaigner, and recovered philosopher. He blogs for The School of Life, teaches philosophy to undergraduates at Cambridge University and is an Honorary Associate in the Philosophy department at Durham University.

As a reader of science who had a dose of philosophy in college and grad school and as a former bicycle racer and current bicycle mechanic, I pick this book up with great interest. The Einstien biography is interesting and the parallel bicycling history and philosophy run together smoothly. Einstien “A socialist who championed freedom, a loner who cared deeply for humanity, a non-believer who saw the universe as God’s handiwork – Einstein was Time magazine’s ‘person of the century.’” He was also a bike rider. He first imagined traveling alongside a beam of light while riding his bike. There is something peaceful and relaxing about riding. Much like Nietzsche and Thoreau who earlier found their mindfulness in walking, cycling slows one down and allows one to see the area and detail around them. There is a peacefulness in rolling along at 15 mph on quiet streets that isn’t there driving at highway speeds or fighting through gridlock. Bicycling relieves stress.  Driving causes stress. A human on a bike is more efficient than any other animal or machine. The calories per mile equate to 3,000 miles per gallon of gasoline.

More on the science and philosophy. The bicycle is a very simple machine four sets of bearings, a chain and cog system, a frame that will last a lifetime. Irvine states that cyclists are not image conscious individuals. I disagree. Having worked in the industry cyclists are the people willing to spend hundreds of dollars to lose 5 grams of rotational mass. They will also spend hundreds on training computers that document every moment on the bike. I have also seen $14,000 bicycles roll out of the shop. I do appreciate the non-image conscience riders. The industry, however, revolves around the newest, lightest, fastest seekers. I have been riding my single speed, steel framed bike for over a decade and have no reason to “upgrade.”  Like, Einstien, and some riders, I am not image conscious.

I think Irvine also knows his philosophy on the bicycle is from the ideal point of view, much like most philosophy and it does lose something in putting it to practical use. He does admit that the default argument against cycling is that it is too dangerous; cars on the street being the biggest threat. In the North Dallas area cars routinely make no stop right turns on red, ignore crosswalks, and have no problem with running cyclists off the road. It is dangerous. Of course, there are parks and bike paths, but one still needs to get to these safely. Having to drive your bike in a car to go ride your bike seems a bit ridiculous. Perhaps, too,  it is a bit quieter in Irvine’s neighborhood. Commuting unless very early in the morning is more stressful than mindful. But, yes, in theory, cycling away from the routine dangers is enjoyable and mindful.  The rider becomes one with the environment rather than sealed away from it.  “Cycling is a living meditation: it allows us to achieve mindfulness not in a hidden retreat but in the full flow of life, while still deriving the same lasting benefits.” An enjoyable, imaginative, and informative read.