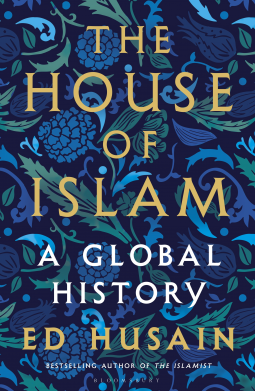 House of Islam: A Global History by Ed Husain is a history and explanation of Islam by an educated Western Moslem. Husain is a writer, adjunct senior fellow for Middle Eastern studies at the Council on Foreign Relations in New York, and a former senior advisor at the Tony Blair Faith Foundation. He is the author of The Islamist, a book about political Islamism and an account of his five years as an Islamist activist. Husain cofounded, with Maajid Nawaz, the counter-extremism organization the Quilliam Foundation.

In the West, there seems to be a single definition of Islam that is portrayed in the media and in the minds of many. This seems to include ISIS, the Taliban, and sharia law. However, Christianity is a peaceful religion that promotes charity, treating all people well, and the Golden Rule. Jesus’ message was one of love and inclusion. We seem to hold polarizing views. No reasonable person would say that the Westboro Baptist Church and its message represents mainstream Christianity. The same can be said of the Aryan groups’ version Christianity. Today we in the West oppose slavery when it was part of the Christian past. I have not read of modern Jews practicing Deuteronomy 21:20-21. There are parts, and laws, of the Bible that are no longer parts society. Just because something is in the Bible does not mean it is practiced.

Husain is a first generation British Moslem. What makes this book so important is it is written by a Western-raised and educated Moslem. He joined the Islamic Society of Britain. Studied Arabic in Syria, and worked for the British Council in Saudi Arabia. His first name is actually Mohamed but students started calling him Ed. What Husain presents in this book is a history of Islam that explains the religion by a practitioner who is also an educated and successful Westerner. He speaks to an audience that he is part of.

House of Islam covers the history of the religion from Muhammad through the Sunni Shia schism and into modern times. Also discussed is Sufism which brought forth some of the regions best poets one that most have heard of or read — Rumi. This is followed by sections on Ottoman Turkey and Islamists.

Relations with the Jews is covered n great detail. In Indonesia, a non-Arab Moslem country, 47% of the population had a low opinion of Jews. An interesting poll considering Indonesia does not have the history and interactions that Arab countries did and still do. Education is another interesting subject:

‘Knowledge and wisdom are the lost properties of the believer,’ taught Imam Ali, ‘so seek them even if they be with infidels.’

Today many see education as memorizing large tracts of the Koran in Arabic but without understanding the language. Memorizing is more important than understanding. Perhaps pre-Vatican II Catholics share the similar experience. As with other subjects, Hussain separates canon from cultural tradition in explaining laws, women, and sex in Moslem countries. Traditions play a large role in the culture. There is nothing in the Koran that states women must wear black in public but in countries like Saudi Arabia, there is little, if any, variation.

House of Islam presents an even view and explanation of Islam and its history.  Hussain separates the words of the prophet from tradition and sayings that are attributed to Muhammad.  He presents a sensible and easy to follow description of the religion that would benefit many in the West.