Book Review — Red-Green Revolution The Politics and Technology of Ecosocialism 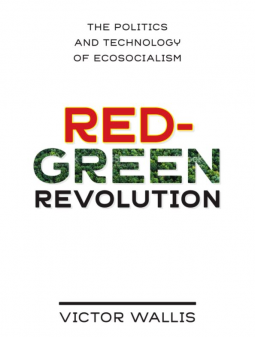 Red-Green Revolution The Politics and Technology of Ecosocialism by Victor Wallis is an examination of the pairing of socialism and environmentalism. Wallis teaches in the Liberal Arts department at the Berklee College of Music and lives in the Boston area. For twenty years, he was the managing editor of Socialism and Democracy and has been writing on ecological issues since the early 1990s. His writings encompass an array of other topics as well, including political strategies, the U.S. Left, U.S. labor songs, and Latin American revolutionary film.

Environmentalism, climate change, CO2 levels, and socialism have all been recent hot-button issues in America. Environmentalism became a popular force and has been used to sell everything as green or environmentally friendly. That, however, is part of the problem. It is not the greening but the selling. Capitalism is about growth, consumption, and accumulation. Environmentalism is about protecting our habitat. The two are not compatible in practice, but in advertising and propaganda, the two seemed made for each other. Clean Coal, for example, does remove sulfur and particulates but does not remove CO2 which is responsible for climate change. Many things are not implemented simply because there is no profit to be made. Thinking green capitalism is not going to change much of anything.

Not to take Marx’s words as gospel, Wallis does believe that Marx needs to be updated. There have been many works done in the name of socialism that do not reflect Marx’s ideas or socialism. Stalin is the most notorious for creating a dictatorship and creating a system of production that had little to do with a classless society or not exploiting man or nature. Chinese Communism is in turn top-down capitalism. China’s economic colonization of Africa and Latin America might be a kinder colonialism but it is done for raw materials and economic advantage much like capitalism.

Wallis’ main thesis is that capitalism cannot become green.  Growth and accumulation are at odds with our long-term survival.  To put it in Ayn Rand’s terms capitalism is selfishness and selfishness is good. Socialism isn’t about making everyone equally miserable but ending selfishness (particularly the 1%).  Cuba, a poor country, with a life expectancy on par with the US spends 90% less on individual health care than the US.  Cuba’s literacy rate is also higher than the US.  It also sends medical, educational, and disaster relief volunteers around the world. In turn, the US (and now China) use their military and political power to exploit resources. There is an interesting case to be made about the collective good over the individual’s good.  It is an attitude on life and the environment that supports it.  Although not having all the answers, Wallis shows that there may be a better way to save the environment and man.  Jimmy Carter seems to sum it up well: “Human identity is no longer defined by what one does but rather by what one owns.”