Book Review — The Moralist: Woodrow Wilson and the World He Made 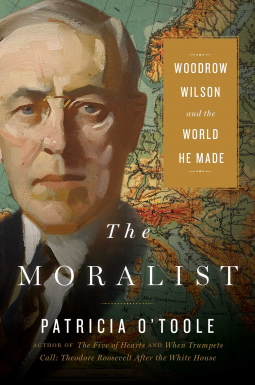 The Moralist: Woodrow Wilson and the World He Made by Patricia O’Toole is a detailed history of Wilson’s political career. O’Toole is the author of five books, including When Trumpets Call: Theodore Roosevelt after the White House, and The Five of Hearts: An Intimate Portrait of Henry Adams and His Friends, which was a finalist for the Pulitzer Prize, the National Book Critics Circle Award, and the Los Angeles Times Book Prize. She is a former professor in the School of the Arts at Columbia University and a fellow of the Society of American Historians.

The young me would have, and did say, Wilson was one of America’s greatest presidents. In my youth, he was the American Commander and Chief in the first World War, a war I read a great deal about. He also opened the Panama Canal. That image a of a leader continued when I was a Marine. The Marines had some of their greatest moments in that war and also were instrumental in shaping American policy in Central America. Later in graduate school working on my Masters in International Relations, Wilson played a significant role in the formation of the liberal theory of international relations. Wilson was also the subject of my thesis research on Huerta and America’s intervention in Mexico. Recently, Wilson has come under fire for his lagging behind on racial equality, women’s rights, and political dissent.

O’Toole traces much of Wilson’s adult life and shows the evolution of his role in history. Wilson was, and remains, the only president with a Ph.D. Furthermore, his Ph.D. was in history and political science with a dissertation entitled: Congressional Government: A Study in American Politics. Wilson knew more about government than any other president previously and arguably still. He changed the role of the president. Earlier Congress held the lion’s share of power. Wilson made the president the central point in American politics, and that position is still enjoyed by the executive branch. The American people get excited about voting for president, and not much excitement goes into voting for representatives aside from voting the party line. Wilson transformed the country and the world with his ideas.

The Moralist is an appropriate title for a Wilson biography. It does entail a sense of hubris and also a sense of uncompromising ideals, both of which fit Wilson. His Fourteen Points was mocked Cleameaceu — “God gave us the Ten Commandments, and we broke them. Wilson gives us the Fourteen Points. We shall see.” Wilson held the world to high ideals yet seemed to miss the mark closer to home. Racial equality was the law, so Wilson saw it not as a government problem, but as a people problem. When he took a position, he maintained that position and did not waiver. He based his beliefs on morality, which meant there could not be any compromise; his world was black and white.

Wilson made foreign policy a critical point for his presidency. Outside of free trade and freedom of the seas, America cared little about what happened outside her borders or sphere of influence. Under Wilson, America played an active role in Mexico, invading twice, and in several other countries in Central America. In 1913 he said of the region “I am going to teach the South American republics to elect good men.”

Wilson played an important domestic role also. He called his domestic program New Freedom. He implemented the Federal reserve, changed the tariff system and moved to an income tax. The Underwood Act reduced tariffs by 25% and eliminated tariffs on essential goods. He joined the progressives in fighting the trusts. Wilson also fought to limit child labor and to aid farmers with low-cost loans.

World War I would overshadow most of Wilson’s legacy. He was “too proud to fight,” but eventually committed the US to the side of the Allies. Although many take that decision as a given, after war broke out much of the US was divided on which side deserved support. Even in Wilson’s cabinet, Britain was creating as many problems for US trade as Germany. Britain had an extensive list of what they considered contraband and did there best to limit any products getting into Germany through neutral ports. Furthermore, with cotton being declared contraband the US stood to lose a substantial amount of trade. Britain was a threat to freedom of the seas and free trade to neutrals.

O’Toole writes a detailed biography of Wilson and the world that he lived and governed in.  It is not an apology for his failures or flaws, which are apparent today.  It shows how a person was shaped by the world around him and how that became the stage he performed on.  Idealism carries with it much hubris.  The lack of compromise creates stress and a feeling of standing against the world.  Wilson’s role in history and foreign policy still remains large despite his flaws and failures.  In many ways he was ahead of his time; in many other ways, he was trapped in the past.  An outstanding biography.