Book Review — LBJ’s 1968: Power, Politics, and the Presidency in America’s Year of Upheaval 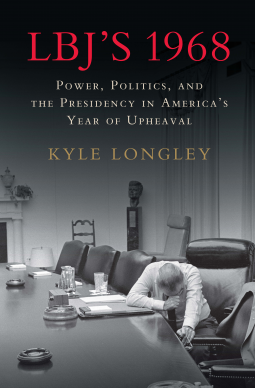 LBJ’s 1968: Power, Politics, and the Presidency in America’s Year of Upheaval by Kyle Longley is a detailed history of one year of the presidency of a longtime politician. Longley is the Snell Family Dean’s Distinguished Professor of History and Political Science at Arizona State University and author of Grunts: The American Combat Soldier in Vietnam and In the Eagle’s Shadow: The United States and Latin America.

Lyndon Baines Johnson was a complex person. He was fifty-five when he found himself thrust into the presidency. It was rumored that he would be dropped from the Kennedy ticket in 1964. For a Texas Democrat at the time, Johnson was unusual. He worked as a day laborer and taught at a segregated Mexican-American school in Cotulla, Texas. Under his gruff exterior and mannerisms was someone who wanted to end poverty, but ended up having his presidency defined by war.

There is no lack of biographies on Johnson.  Caro’s The Years of Lyndon Johnson is probably best known for its great detail.  Rather than focus on the entire life of the former president Longley concentrates on the final full year of the Johnson presidency.  1968, the final full year, was a year unlike any other in history.  Vietnam was distracting the public, before and continued to do so but now other events seemed to even overwhelm the war.

Longley starts with the 1968 State of the Union Address and follows along with events of the year.  The State of the Union Address may have shocked the nation but Johnson decided to hold off on his announcement not to seek another term.  The US was deficit spending with Vietnam and The Great Society competing for funds.  Johnson originally saw the prosperity of the US as a time to help eliminate poverty and expand on civil rights.  He felt the fruits of the country’s prosperity should be enjoyed by all.  Just six days after the State of the Union Address North Korea seized the USS Pueblo and its crew.  This event would drag on until December 1968.  A small nation was able to cripple any response from a superpower.  It became a deep embarrassment to US power and prestige.

In March, LBJ announced his intention not to seek reelection.  That announcement was quickly followed by the assassination of both Martin Luther King and Robert Kennedy.  King’s assassination brought violence to many cities as people reacted and rioted.  Gun violence killed JFK, MLK, and Robert Kennedy.  Johnson worked to restrict gun sales, particularly through mail order. Guns were a source of great violence in the US including the University of Texas Tower shooting in 1966.  Johnson’s role in restricting gun violence as well as the Great Society program was stifled by his self-inflicted lame duck presidency.

Johnson’s foreign policy also suffered.  The US stood by helplessly as Soviet troops moved into Czechoslovakia.  Attempts to make peace in Vietnam were also hindered when it appeared that Nixon persuaded South Vietnam to wait until his election rather than make a deal with LBJ.  Johnson had evidence of Nixon’s meddling but did not pursue it preferring not to sully the office of the president or appear to be playing in dirty politics.

As the election approached, the Democrats were in disarray.  Their convention was a scene of violence.  Hawks and doves splintered the party as well as the deep south that did not support the civil rights movement.  Johnson did not attend the convention and was barely mentioned. Humphrey lost a close popular vote to Nixon.  Wallace took the deep south from the Democrats allowing an easy electoral college victory for Nixon.  Johnson again was helpless.  He wanted to be known for the Great Society and for creating peace.  Instead, he is remembered by most for the Vietnam War and the national guard in American streets in Selma, Chicago, Detriot, Washington, DC, and Baltimore — the most deployments of any president since the Armed Forces Reserve Act.

Johnson served in troubled times and the times took a toll on the man.  Longley shows that despite the troubles Johnson was a man who deeply cared.  He was pained by American losses in Vietnam.  He cared about the poor and ending poverty.  He wanted to project America’s power and democracy around the world.  He met adversity in almost everything he attempted.  It took a toll on the man and was probably responsible for his early death.  Johnson died of a heart attack at the age of 64, almost exactly four years after handing over the presidency to Richard Nixon.  An excellent snapshot of a great American politician.