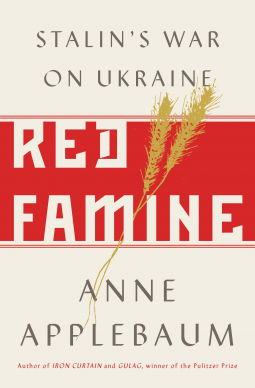 Red Famine: Stalin’s War on Ukraine by Anne Applebaum is the history of Russian-Ukranian relations from 1917- 1934 centering on Russian atrocities. Applebaum is an American journalist and Pulitzer Prize–winning author who has written extensively about communism and the development of civil society in Central and Eastern Europe. She is a visiting Professor of Practice at the London School of Economics, where she runs Arena, a project on propaganda and disinformation. She has also been an editor at The Economist and The Spectator, and a member of the editorial board of The Washington Post.

The Ukraine is the birth place of the earliest Russian settlements. Kiev is called the mother of Russian Cities or a cradle of the Rus’. The historic flux of borders and conquered lands and peoples had created friction between the various nationalities that became apparent with the fall of the Romanov dynasty.  Ukraine saw it was time to break from Moscow’s rule or rather St. Petersburg’s rule.

Instead, Ukraine found itself in the middle of a battle ground. The Bolsheviks wanted the territory. The White Russian Russian army defended but without much care for the Ukrainians. The people were pummelled by both sides. With the defeat of the White armies, The Bolsheviks systematically slaughtered tens of thousands of Cossacks. The Bolsheviks saw Ukraine as their bread basket. Quotas on wheat and forced collectivization created chaos and mass death. Peasants fought against losing their land, live stock, and possessions. Although there was resistance, it was far from organized and effective. Later, Stalin’s paranoid mind saw any resistance real or imagined as a threat to the USSR. Many were executed for a variety of “crimes.” Many simply just disappeared.

The wheat taken from the Ukrainian farms was not just taken and sold back to the farmers as bread or even used to feed Russia.  It was exported for hard currency.  The five-year plans and quotas existed independently of reality.  When yields were lower than required Moscow took actions like limiting communal tractors forcing more manual and (disappearing) animal labor.  Instead of finding solutions more restrictions were added.  By the time of the 1933 famine, there was not enough healthy or living people to plant and harvest.  There was no carrot and stick only the stick.  The Springtime brought with it not the smell of flowers or new life but the decay of rotting bodies.

Famine is perhaps not the most accurate word for the human catastrophe in Ukraine.  There was food but it was for the consumption others outside the Ukraine and even Russia.  People were dying in front of rows of grain.  Stalin feared Ukrainian nationalism as a threat to Soviet power.  Lenin recruited Ukrainians under the guise of Soviet unity rather than Russian unity.  Stalin, however, simply wanted to crush any resistance from organized threats to women and children stealing a handful of wheat.  It is estimated that three million Ukrainians died, mostly of starvation,  in 1933.  Applebaum also describes the process of starvation on the body and the mind.  Using declassified records and documents along with first-hand hand experiences she captures the systematic terror and suffering that is one of the worlds mostly forgotten tragedies.  When the world was not looking, Stalin waged war on people in his own country killing millions with systematic starvation.  Red Famine details the atrocities, failures, and indifference that allowed the senseless slaughter of millions.