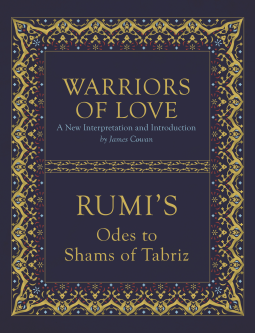 Warriors of Love: Rumi’s Odes to Shams of Tabriz by Mevlana Rumi is a partial biography and a small selection of poetry. Rumi was a 13th-century Persian poet, jurist, Islamic scholar, theologian, and Sufi mystic. His poems have been widely translated into many of the world’s languages, and he has been described as the most popular poet and the best-selling poet in the United States.

James Cowan provides the introduction and translation in this work. This inclusion is important since the introduction makes up the bulk of the book. Cowan describes the relationship of Rumi and Shams of Tabriz. The friendship between the two grew into something that Cowan describes as seeing a reflection of God in each other. Thier friendship expanded into a spiritual love and a great understanding of God. They were both practitioners of Sufism, a mystical form of Islam that centers on internal purification and self-discovery. Strict dogma is missing from this practice and includes things that may not be acceptable in stricter interpretations like dancing and being a fool for God.

Much of the introduction concerns itself specifically with Rumi’s deep friendship with Shams and his discovery of poetry in the process of and in remembrance of that friendship after Shamsdisappearence and murder, something Rumi never fully accepted. Comparisons of other very strong friendships are covered before the poetry section.

The poetry is translated by Cowan and represents a more poetic translation of these verses using modern style instead of the traditional Victorian style. He attempts to keep the rhythm and intent of the original poetry intact rather than strict meaning. Shams is presented as the perfect man and the wild one (his dancing in part). The short selection of poetry is interesting in a modern sense and always written in couplets although not rhyming. A translation that, however, does seem to keep the original intent of the writing intact. It is difficult to classify the book itself as poetry since so much is written as an introduction.  However, calling it a biography supported with poetry may be closer to reality.  Either way, very well done and informative.