Book Review — The Writing on the Wall: On the Decomposition of Capitalism and Its Critics 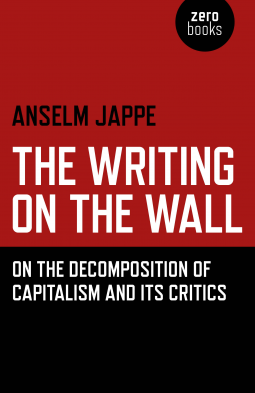 The Writing on the Wall: On the Decomposition of Capitalism and Its Critics by Anselm Jappe and translated by Alastair Hemmens is a study of capitalism and its future failure. Jappe grew up in Cologne and in the Périgord. He studied in Paris and Rome where he obtained, respectively, a master’s and then a doctorate degree in philosophy. In his writings, he has attempted to revive critical theory through a new interpretation of the work of Karl Marx. His book Guy Debord was an intellectual biography of Guy Debord, the prime mover of the Situationist International.

Marx’s specter did put a fright into Europe in the late 19th century. Industries treated employees better. The work week was limited. The industrial worker now enjoyed something new called leisure time. The specter seemed satisfied and a new era of growing wealth and security that lasted until the out break of WWI. Unions and socialists still kept the pressure on governments and industries, but failed to keep workers from fighting other workers who lived under a different flag. After the war and the Russian revolution, governments and industry struggled to prevent socialists from rising to governmental power. There was a rise in anti-socialism backed by industry and wealth. This was best seen in Germany and Italy. In the US, socialism was controlled by laws, especially the espionage acts that put Eugene Debs in jail. There was also violence against unions.

Marx predicted that Capitalism would fail. It was a beast that consumed everything in front of it and would eventually devour itself. Workers were the first to get eaten and spit out broken. When they fought back the jobs left or they were replaced. Now, it is resources and our planet, in general, that is suffering. Industrialization and consumerism have upset the environment from climate change to pollution, to the giant island of floating plastic in the Pacific Ocean. Wages of workers remain stagnant while the top percentage of white collar workers see increases in earnings. Industrial jobs are moved overseas for the cheap labor and lack of regulation. Countries like China and India benefit only because they were so far behind the Western World. Workers there are paid low and are worked long almost like the industrialized revolution here. Some benefit greatly the vast majority do not.

Jappe leads the reader through his thinking with ten, very well documented, essays. One point that particularly stuck in my mind was behavior. We have four taste senses; sweet, salty, bitter, and sour. A child will only ask for sweet and salty. We learn to like the other tastes and develop an appreciation for them with time. Cut out the learning and what we have left is basically McDonald’s — salty food and sugary drinks. Cut out the education, or dumb it down, and we have people whose only qualifications are unskilled labor, the so-called McJobs. What is needed to pass high school today is a lot less than fifty or seventy years ago. An associates degree that would secure a tech job in the past carries much less weight today. Jobs that used to have insurance, vacations, pensions, and holidays don’t anymore.

We are in an era of “Bread and Circuses.” The system is starting to consume itself and we are told not to worry. We have cable television, cell phones that are used for mindless games rather than talking. Social media that helps pit one side against another.  In America, our political system is split into only two sides an “us versus them” scenario. Realistically the parties are not that far apart on the political spectrum. It is not socialism versus fascism.  The rich still benefit no matter who is in control.   The system encourages people to vote against their own interests with sound bites and catch phrases rather than thoughtful discussion.  The idea of capitalism trumps the idea of democracy.

The fear that capitalism will fall to socialism is not one that is based in reality. Capitalism will destroy itself and it will not be a workers revolt that will rise but rather barbarism. Much like a building crumbling to the ground and new better building will not arise unless there is the organization, skilled labor, and a popular willingness to build a new, better building.  That is what is missing and the system, in order to protect itself, the system works to undermine that organization.  Society is not going to fall into socialism when capitalism fails. Mankind will enter a Hobbesian state of nature.  Jappe explains to the reader that the writing is on the wall and it is up to us to first notice and then react.

One response to “Book Review — The Writing on the Wall: On the Decomposition of Capitalism and Its Critics”