Book Review — Skinheads, Fur Traders, and Djs: An Adventure Through the 1970s 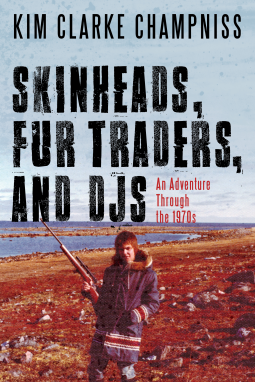 Skinheads, Fur Traders, and DJs: An Adventure Through the 1970s by Kim Clarke Champniss is a biography and a bit of a musical history. Champniss is a Canadian television personality and musician, best known as a VJ for MuchMusic during the 1980s. This is his second book.

Champniss lived an interesting life over the time covered in this book. England wasn’t doing well. He didn’t do well in school. So he made a choice different than most. Instead of joining the military or taking up a profession that would be considered illegal, he took a job with the Hudson Bay Company and spends a year in Eskimo Point (now called Arviat), Nunavut (Formerly part of the Northwest Territories). Here the former biker/rocker turned disco fan finds himself in the wilderness isolated from music and the fashion of the times.

Champniss writes well and makes life sound exciting even in difficult times. Going from London to a town of 750 people of a radically different culture presents interesting adaptations and for the most part some humorous stories. After leaving the Hudson Bay Company he talks about other struggles of attending college and trying to hold a job in rather poor economic times. Through everything, he has his music and the music blends with his lifestyle. He follows his dreams of becoming a DJ in Canada. Champniss includes quite a bit of music history, but mostly of the disco and dance variety. Those looking for Lou Reed, Led Zeppelin, or even Rush will be disappointed. KC and the Sunshine Band is, however, mentioned more than a few times.

This is an engaging and well-written biography. Although a few years younger than Champniss, I remembered all the music and world events including the inflation and unemployment. To be completely honest, I had no idea who Champniss was but the subtitle “An Adventure Through the 1970s” was enough to hook me. Well done.

3 responses to “Book Review — Skinheads, Fur Traders, and Djs: An Adventure Through the 1970s”