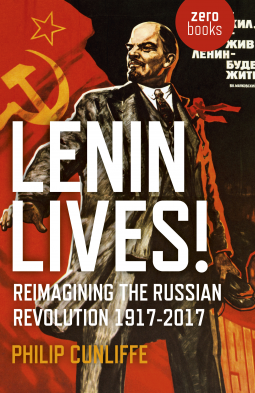 Lenin Lives!: Reimagining the Russian Revolution 1917-2017 by Philip Cunliffe is a reimagining of world history. Cunliffe is Senior Lecturer in Politics and International Relations at the University of Kent, which he joined in 2009. He has written widely on a variety of political issues ranging from Balkan politics to Brexit, with a particular focus on international efforts to manage violent conflict since the end of the Cold War.

Communism is something that is really never going to die out completely. Factually, it never really existed outside of writing. Marxism or Communism does not equal Leninism, Stalinism, Maoism, or what the Kim Dynasty practices in North Korea. Lenin changed the worker’s revolt to a peasant revolt and finding the peasants unable to govern themselves he created a single party dictatorship. Stalin escalated and created a totalitarian state. Things never went the way Marx wrote. The rest of the twentieth century became a battle between “communist” dictatorships and capitalism with its right wing dictatorships. Much time and effort were spent on establishing and defending right wing dictatorships and condemning those on the left. The people living in these dictatorships would be hard pressed to find a real difference between the two.

Cunliffe’s alternative history is like many. There are plenty of what ifs and almosts that are given new life. The key points that I was looking for in this book were the development of Marxism as intended and how that would come about and secondly, seeing Marxism developed in industrialized societies. Cunliffe’s alternative history does start with the Russian revolution but spreads quickly through Europe, the Middle East, and Asia (with China leading the way).

Lenin Lives! keeps the key point in most alternative history’s alive, that is World War I. That war is the tipping point of history. Without it, empires and monarchies grow. The high cost of the First World War put heavy economic pressure on the great powers from which they would not recover. The war also turned many against governments and against the capitalists who profited from the war. Workers and others were as radicalized as they were when the Communist Manifesto warned of the “Specter over Europe.”

Compromise seems to be the biggest hindrance to worldwide communism. Workers and unions compromised as they did in the 19th century with capitalists. There was good among the compromises shorter work weeks, vacations, and the creation of leisure. Later health care was included in some countries. Compromise moves both ways. Today hard earned benefits are quickly disappearing. What if unions took charge. What if strikes forced the governments to capitulate.

There are many “what ifs” in this book and being able to pick and redirect history into something you desire. There are many places where small changes could have had large impacts. Groups and people in leadership positions would need the highest degree of integrity not to slip into totalitarianism. The benefits of the global spread of communism would have been many including no WWII, no arms race, expansion of science and art in war world without war. The Wilsonian or Liberal theory also would have done much the same. Countries that trade together don’t go to war with each other. Democracies do not go to war against other democracies. Most governments that come to power do so with some support from the people there. There is always a dream of a better life.

Although I enjoyed Cunliffe’s theories and historical paths it is much like the little rhyme, “if ifs and buts were candy and nuts, every day would be Christmas.” The speculative history seems much like something the communists might have produced to lead the population into the future. Marx made no predictions of the future but Lenin and the Communist Party did. Although well written this is a book someone on the left would enjoy mainly because it gives the wanted outcome.