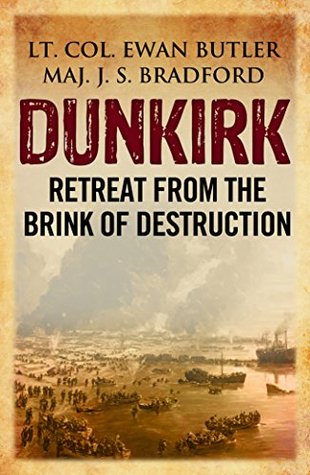 Dunkirk by Lieutenant Colonel Ewan Butler and Major J. S. Bradford is the factual account of the events leading up to and the evacuation at Dunkirk. Both Butler and Bradford served in France as junior officers in 1939 and the first half of 1940 as part of the British Expeditionary Force (B.E.F.)

Ask an American when was Pearl Harbor bombed and most will probably get the answer wrong. The same goes for what years were America involved in Vietnam. People also see no irony in wishing others a “happy Memorial Day.” It seems reasonable that in the next ten years many will forget what year the 9/11 attacks happened. It is just not an American problem; it happens to all nations. With wars and peace and more wars, people tend to forget the details of war. The original title of this book was Keep the Memory Green. The authors wanted to keep alive the sacrifice and the events leading to Dunkirk.

Dunkirk is an odd event in history. It is remembered, even without the recent movie release, as the Miracle at Dunkirk. There is a mythology that surrounds the defeat of Western European armies and turns it into a victory. The authors mention this more than a few times. They include a quote by Churchill immediately after the evacuation of the 338,000 troops:

“We must be careful not to assign to this deliverance the attributes of a victory. Wars are not won by evacuations.”

For the all the great logistical support this operation received, it must be remembered that just over two weeks later France surrendered and Britain was fighting outside of Europe. The British army would not return to France for four years.

Butler and Bradford also examine the roles and actions (real and perceived) of the three branches of the British military. The army took the brunt of the abuse from the Germans and it was quick to blame the air force for not doing enough. It was discouraging to know that the planes flying overhead were not your own, but the enemy’s planes. The Navy’s support was limited to the sea and support in what harbors it could reach. The army felt isolated. Belgium’s surrender left the British cornered between the sea and the Germans. Supplies were limited and support was failing. The feeling of isolation was a reality.

The British army’s experience in France is also covered from their arrival to the evacuation.  Comparisons of the British army in 1914 and 1939 are made.  In many aspects, the British were much more prepared in 1914.  Shortages abounded in almost every aspect of combat support from fully functional tanks to food and ammunition.  Lord Gort worked hard to gain the supplies needed and provided exceptional leadership to the B.E.F.

When evacuation was seen as the only option, it was hoped that 30 -40,000 might be rescued at Dunkirk.  The authors devote a chapter to homeland support of the war.  This is done with the story of Alfred Harris and his thirty-five-foot cabin cruiser the Berkshire Lass.  Harris’ savings and retirement were tied up in that boat.  He participated in the evacuation of Dunkirk even though neither he nor his boat had been outside the Thames Estuary.  There was no shortage of bravery from any of the armed services or those civilians participating in the evacuation.

The goal of the book as its original title points out is to keep the memory of Dunkirk alive.  That memory is the good and the bad.  A country unprepared for war must be ready to accept defeat.  Bravery alone will not win a war.  That being said, bravery did save the 338,000 troops.  It is these actions as well as the failures that must be remembered.