Book Review — Legion of the Lost: The True Experience of an American in the French Foreign Legion 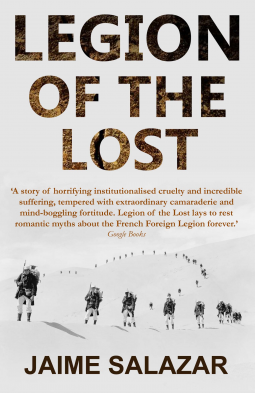 Legion of the Lost: The True Experience of an American in the French Foreign Legion by Jamie Salazar is the story of one American’s experience in the French Foreign Legion. Salazar is a graduate of Purdue University and employed by Siemens before joining the Legion. He has earned his law degree and currently works in Huston, TX in the energy sector.

We all at one time or another have an urge to run off and do something “extreme.” After high school, I joined the Marines, but that was more youthful patriotism than escaping. The French Foreign Legion was something that I read about and occasionally saw portrayed in movies. The idea of serving in France had no appeal to me.

The Legion was formed in 1831 specifically for foreigners to fight for France. Typically it attracted people on the run or people looking for some place to hide. It did, too, attract some idealists but they were the minority.  In Salazar’s time, the legion still attracted the same crowds. Salazar seems to be different in his reasons for joining. He wanted something different than engineering sales and life behind a desk. He joined for what he didn’t want more than for what he wanted.

Salazar describes the brutality in the daily life of a Legionnaire. From “boot camp” through being a junior legionnaire violence from non-commissioned officers (NCOs) was a part of daily life. It wasn’t just the NCOs. Various “mafias” existed English speakers, Russians, Eastern Europeans who didn’t seem to mind handing out violence on their peers. Unlike the Marines where every race is green, the Legion doesn’t seem to support racial harmony. The violence is far more than I would have expected. I assume that a combat ready group of “thugs” would be looking to vent in a peacetime environment. Violence, drinking, and drugs became the norm.

Salazar presents a mix of honor, esprit de corps, and servitude that seems to part of another century. The mystique of the French Foreign Legion is ripped away and replaced with small patches pride and accomplishment in a sea of misery. In many ways, the Legion seemed like a prison with sadistic guards and rival “gangs.” Although loyalty is to the Legion it does not seem to be enough to form group cohesion and effectiveness. Other services rely on nationalism and patriotism to create unity and avoid possible personal (racial and ethnic) conflicts. Salazar’s story is as interesting as it is unexpected.