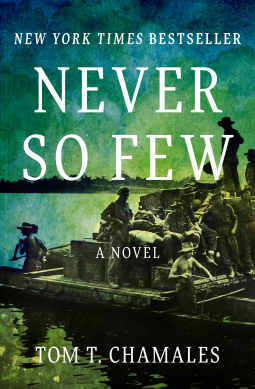 Never So Few: A Novel by Tom T. Chamales is a World War II novel set in Burma. Chamales was a veteran of WWII and former member of the OSS and Merrill’s Raiders. Attached to OSS Detachment 101, he served in Burma training the Kachin Raiders and witnessed American soldiers being robbed and killed by Chinese Nationalist soldiers. Much of his experience has been fictionalized in this novel. Chamales is also the author of Go Naked in the World.

Many writers draw from their own experience and Chamales was no exception. His own experiences in Burma are used as the backdrop of the story. Although this is a war story much of the writing is devoted to the characters rather than actual combat. Working behind enemy lines the with foreign fighters takes a toll on those involved and gives the reader a view into the mind of a soldier.

There is also a division of the westerners and the locals. Some locals seem only too willing to serve under the OSS and Captain Con Reynolds. Others who have experienced war in cooperate but use their expertise to help the Reynolds and his men. Burma and other British colonies in the region were problematic to the allies.  Some in the region viewed the Japanese as liberators so the battle was more than against the Japanese it was  also a matter of keeping locals loyal to the British and the allies.

World War II is not a usual reading topic for me especially if it is fiction. This book seemed to be more about people than about fighting. That is something that runs through all great war stories The places and weapons change but people are the constant. The book reminded me of a World War II Apocalypse Now in that it centered on the eccentricities of those involved. Chamales deeply affected by his experiences as both his novels revolved around the war.

Reading Chamales’ biography it seems that he never recovered from the war. His short life after returning to the United States involved heavy drinking, violence, and an accidental death. Perhaps some of the most dramatic effects come from an author who writes his or her own experiences or demons. Much like Virginia Woolf used her battle with mental illness to describe shell-shocked Septimus Warren Smith in Mrs. Dalloway, Chamale converts his experiences into fiction with an uncanny realism. Under the veneer of fiction lies realism. Very well done.