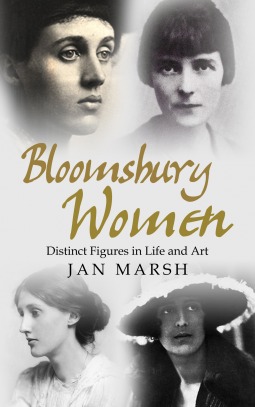 Bloomsbury Women : Distinct Figures in Life and Art by Jan Marsh. Marsh has written a number of ground-breaking biographies, including PreRaphaelite Sisterhood, Jane and May Morris, The Legend of Elizabeth Siddal and her highly acclaimed work, Christina Rossetti. She has also scripted arts documentary programmes for radio and television, and has curated exhibitions of work by women painters of the PreRaphaelite movement. She is a contributor to the Dictionary of Women Artists and a frequent lecturer in Britain, North America and Japan. This is a reprint of the original 1995 book by Endeavour Press.

After reading Virginia Woolf’s diaries and letters I thought I had everything I needed to know about the Bloomsbury Group. I also touched on Leonard Woolf’s writing and dug into Vita Sackville-West. I knew of Vanessa Bell because of the care she gave Virginia Woolf during her breakdowns. I didn’t know about Vanessa Bell and her relationship and child with Duncan Grant. It seems the group was very fluid in their sexual relationships as well as gender roles and identities. Acceptance was both hetero and homosexual. Their openness was unheard of at the time and much was done far from the prying eyes of society.

Marsh centers her study on Virginia Woolf and even more so on Vanessa Bell. Despite the title men are prominent in the reading; This is the first I noted David “Bunny” Garnett and a few others from the group. Bloomsbury was also important and unique in that women were treated as equals. Wealth and education seemed to not to play a major role either. It was a matter of art, writing, and painting, that showed one’s worth to the group.

An interesting aspect that I picked up on in this book was in the style of both sisters. Vanessa was inspired by the post-impressionist painters of the group, Duncan Grant, and Roger Fry. Her heavy strokes and “blank faces” left the observer understanding from the color and shape rather than facial expressions. Virginia Woolf attempted to capture effect in her writing. She described her writing as visual impressionistic. Vanessa Bell chose not to use the most telling part of human emotion, the face. Virginia Woolf did the same by avoiding a narrative story in her writing.

A short, but very informative, book showing the inner workings and people of The Bloomsbury Group — those who stayed, those who made it happen, and those who didn’t measure up. Its demise is also shared by the tragedies experienced by the remaining members. Although there were children and members to carry on, the final loss of Virginia Woolf darkened the group and the remaining members went their own ways.