Book Review — How Bad Writing Destroyed the World: Ayn Rand and the Literary Origins of the Financial Crisis 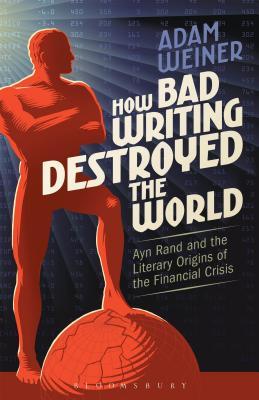 How Bad Writing Destroyed the World: Ayn Rand and the Literary Origins of the Financial Crisis by Adam Weiner is an interesting look at how one book snowballed through history. Wiener is associate professor of Russian and contemporary literature at Wellesley College.

Bad writing, itself, destroying the world may seem a bit farfetched but ignoring political theory and religious texts, two come to mind rather quickly. Mein Kampf and The Turner Diaries both were poorly written books but made a major impact on society. Mein Kampf was the beginning of Nazism and The Turner Diaries is held in high esteem with militia groups and the domestic terrorist Timothy McVeigh. Another badly written book is What is to Be Done? by Nikolai Chernyshevsky. This is not to be confused with Lenin’s book of the same title although he was greatly influenced by the original.

Chernyshevsky wrote What is to Be Done? in 1863 in response to Turgenev’s Fathers and Sons. The book was written in opposition to the conservative Tsarist regime and called for socialism as the cure. Vera, the main character, dreams of freeing people from the basements (the prisons the masses live in) much like a shallow copy of Plato’s cave allegory. There are several flaws in logic and unbelievable plot lines. The book was deemed so poorly written that the censors allowed it to be published simply because it was such an embarrassment to the anti-Tsarist forces. It would be today’s equivalent of someone making a movie about sharks in tornados — it’s so bad no one would go for it. Just like Sharknado, Chernyshevsky’s book became a cult hit.

Lenin was so impressed by the book, that he took the title for his own book. What is to Be Done? was the ideal of socialism. No charity, everyone needed to work, even children. Life will be built in a society where one’s own interests benefit everyone. Chernyshevsky called it rational egotism. In society and personal relationships, if everyone acts in their interest, the entire community would benefit. Sometimes, however, things get a little twisted with love and fake suicides. The foundation of the utopia was built upon aluminum. To be fair, aluminum was pretty rare at the time and a modern a modern equivalent of a city of gold, but far more functional.

A great deal of Weiner’s research is the Russian reaction to Chernyshevsky’s writing. However, the last quarter of the book takes it to America. Someone else takes the very same idea’s Chernyshevsky proposed and instead of socialism replaces it with capitalism. There is no aluminum city but there is Rearden Steel. The repressive Tsarist government is replaced with moochers. Instead of the masses rising up, the job creators disappear. Rational egoism is renamed selfish interest, but still provides the moral backbone of the story. Like Chernyshevsky, Ayn Rand relies on heroes to lead the way. Morally superior people (although rape is given a pass) who fight for what is right. There are the holes in Rand’s story as there are in Chernyshevsky’s work — perpetual motion machines in one to child labor in the other. Perhaps one of the most obvious flaws in Rand’s book is the group sitting in Galt’s Gulch planning to buy the property back after the collapse of society for pennies on the dollar. It is a scene that is reminiscent of the pigs and men meeting at the end of Animal Farm or the contemporary vulture capitalism

So this is all fiction and fiction isn’t real life. A one hundred and fifty-year-old novel can’t influence the American economy. But, what if, that book’s ideas were changed a bit one hundred years later, and the new author developed her own loyal “collective” of followers. And what if one of those followers and true believers was a man named Alan Greenspan. What if he put those policies into practice but corrupted them with a safety net. Wiener takes the reader on a trip through history that the BBC’s James Burke would be proud of — connecting an obscure 19th Century Russian novel and Greenspan admitting “a flaw in the model … that defines how the world works.” after the US financial meltdown. There is quite a long build up from the Russian novel to the Ayn Rand tie in, but it connects step by step. Wiener presents his thesis in detail in his introduction and uses the body of the book as a defense of his points.

2 responses to “Book Review — How Bad Writing Destroyed the World: Ayn Rand and the Literary Origins of the Financial Crisis”