Poetry Review — A Bird is Not a Stone: An Anthology of Contemporary Palestinian Poetry

“Perhaps it’s good for one to suffer. Can an artist do anything if he’s happy? Would he ever want to do anything? What is art, after all, but a protest against the horrible inclemency of life?”
― Aldous Huxley 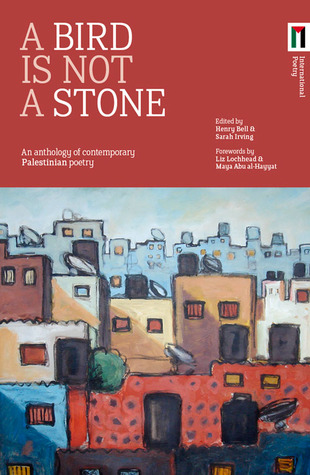 A Bird is Not a Stone: An Anthology of Contemporary Palestinian Poetry edited by Liz Lochhead is a diverse collection of Palestinian poetry. Lochhead is a Scottish poet and dramatist, originally from Newarthill in North Lanarkshire. This collection has been translated by twenty-five Scottish writers which add to the flavor of the writing.

Palestine has been a news story for the last sixty years. It is a simple region that remained quiet unless interfered with by outside powers — Romans, Crusaders, Turks, and British. One thing the poetry reflects on is that people want to be left alone to live in peace on their lands. The topics covered include the camps, travel restrictions, Gaza, and most importantly avoiding death. Gratitude is reflected in a poem of a man who looks over his children every time he sees a news picture of dead children buried in rubble. The theme of blood and ink runs deep through many of the writings.

Bisan Abdul Khaled adds a Russian flair invoking Pushkin and Lenin. Lenin or more generally communism in the removal of national borders and the faked maps that leave out Palestine. Palestine is seen as a woman or more importantly a mother in poems. The poems reflect honor on both women and their homeland. Women suffer through life — childbirth, societal restrictions, loss of children. Palestine suffers much the same. Suffering is said to feed great art and in Palestine, there is no shortage of suffering.

Some of the poems carry what is expected from Arab poems. The land, the violence, and the loss of dignity. The longest poem in the collection is written by Omar Shabanah is simply titled “The Poet.” It opens with how the poem will be dissected by critics as lyrical or elegiac or common and the message of the poem will be lost in its structure and criticism. The poet watches the world from the tenth floor of a building. He is able to see all of his homeland and he watches, as he ages from youth to middle age to old age. He sees a man hiding beautiful illusions in his bags soon to be lost.

And he was misled and mislaid
Mislaid and misled
Until he lost himself in the world
And his universe became a pit.

He relates to “The Waste Land” and a different Walt Whitman crying over dried leaves of grass. His poem is lyrical but closer to “The Waste Land” as Eliot surveyed the Europe ravished by war. He takes a flowing beauty of Whitman and turns it to death. Looking from above one sees the world almost in hindsight.

My favorite poem in the collection for its simplicity and truth:

Not only rivers have a source.
Paths trickle from single dwellings till,
fed by tracks from villages, they go
through towns and cities. Swelled
by tributary streets till they end
in mighty ports and seaside resorts.
Roads die when peoples’ hopes, fears,
wishes, traffic, no longer flow through them,
unlike rivers which are not made by fishes.

All the poems are accompanied in their original Arabic on the left page and English on the right. A few of the poems are also translated into Gaelic and Scottish. A Bird is Not a Stone will introduce the reader to a culture of great poetry and will show the reader familiar with Arabic poetry that there is more to Palestinian poems than Darwish

One response to “Poetry Review — A Bird is Not a Stone: An Anthology of Contemporary Palestinian Poetry”