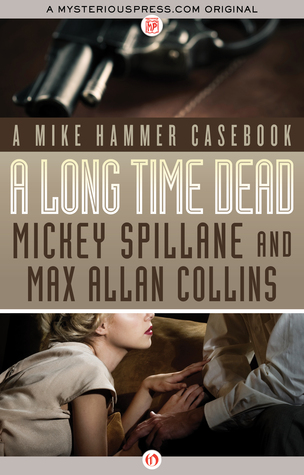 Growing up, there was Mannix. Mike Connors took a more than his share of punishment. He was shot seventeen times and knocked unconscious fifty-five times in eight seasons. Then came James Rockford who with his cool car also became the victim of much abuse. Private eyes took a lot of abuse. Then came Stacey Keech playing Mike Hammer. Hammer didn’t take the abuse. He dished it out.

A Long Time Dead is a collection of short stories by Mickey Spillane that were left unfinished at his death. Collins collected up the stories and finished them. He has had a history of working with Spillane and seamlessly fills in the missing material. The short story format is new even so much to make the television episodes seem long. It is the same Mike Hammer — gruff, quick to use his gun, and by far the most sexist P.I. in popular culture. Mike thinks that the female scientist would make a nice specimen and hardly passes a chance to describe a woman as a work of art to the reader. Velda, his secretary, is more than a secretary. She is a partner in the Hammer Investigations. She also carries a .22 or .38 — progress, but still smaller than Mike’s .45.

A Long Time Dead brings together eight stories from three decades of writing. The stories grab the reader from the start whether it is a junkie on death row or a disabled veteran. Justice comes quick and is forceful to the lowest hood to authority figures. There is the law and there is justice. Lucky Strikes, beer, and violence make up a good part of this detective’s diet. Rough, smooth talking, and driven Mike Hammer returns for some unfinished business.