Book Review — The Perfect Dictatorship: China in the 21st Century 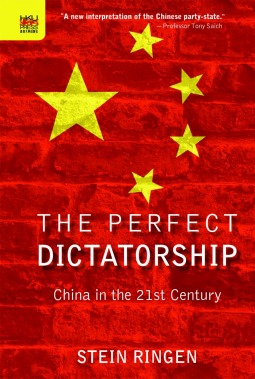 The Perfect Dictatorship: China in the 21st Century by Stein Ringen is an examination of the evolution of the modern Chinese state and current positions. Ringen is a Norwegian sociologist and political scientist. He is Professor of Sociology and Social Policy at the Department of Social Policy and Intervention, University of Oxford, and a Fellow of Green Templeton College, Oxford.

Ringen provides an interesting perspective on China. As a Norwegian, he is in a neutral position to give an unbiased look at China. Typical examinations of China are from expatriates and those with an anti-communist bias. Ringen is not a Chinese apologist, but a reliable source of information. He does like to compare the evolution of China with that of South Korea and nation that moved from authoritarianism to democracy and small job economy to a technological cutting edge. Korea creates. China copies.

The discussion I enjoyed the most was the one on legitimacy. Many in the west associate legitimacy with democracy, but that is not always the case. Totalitarian regimes frequently use elections to prove their legitimacy to the world. The USSR, Iraq, and Iran all had/have elections but the results are never in doubt. Legitimacy here is the internal legitimacy that keeps the local population supporting, or at least not rebelling against, the government. This is where the Chinese government holds the edge.

Many societies crave freedom or a voice in the government. The Chinese population craves stability. China has been embarrassed in the 20th century by foreign interventions from the west and Japan. Upheaval and foreign control were the norms. Now there is internal tranquility. Albeit strict and repressive, the Chinese society is stable.

Much press is given to how many people China has pulled out of poverty. The number is quite impressive, however, the number still living in poverty is enormous. China also has the greatest income inequality in the world. But there is a hope that people will be better off as the economy grows. Corruption is being attacked by the government offering a more fair footing. The government is trapped in a game of maintaining power and keeping the population compliant.

There is plenty of discussion on economy and growth as well as the quality of the growth — assembly jobs vs innovation. The People’s Army is covered as a source of power in the state and its reform into a professional army from a political tool. The intertwining of the party and the state also create a unique power system different from the Soviet or totalitarian regimes. This is the key to the “Perfect Dictatorship.” A well researched and refreshing look at Modern China.