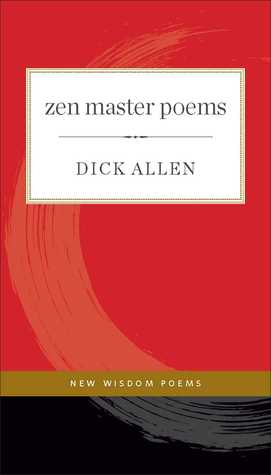 Zen Master Poems by Dick Allen is the poet’s eighth collection of poetry. Allen is known as a mystical poet, A Zen Buddhist poet, a poet concerned with the turn of the twenty-first century, a poet of contemporary science, and a poet whose style ranges from free verse to formal. He has been widely published and has served as Connecticut’s poet laureate for five years.

The zen poetry sticks with the zen traditions. It is not something that can be explained if you don’t understand. You have to understand on your own or discover the meaning while or after reading. Allen also brings Western ideas to the table of an eastern philosophy. He mentions the Beatles twice and the Who (by lyrics). He also includes the Beat Generation. “As Han-Shan Observed” took me back to Kerouac’s Dharma Bums. Japhy Ryder (Gary Snyder) explains the poem “Cold Mountain” to Ray Smith (Jack Kerouac).

Poems range from thought provoking to seemingly impossible. Others capture beauty and inspiration:

The Secret is to Leap

The secret is to leap widely and strangely over the deep
not knowing
what’s down there, but certain
in some crevice
there must be a small purple flower.

In another poem, he pays homage to a two-hundred-year-old drinking cup pondering on how many different lips have touched the rim. How many fingerprints are on its handle. How many times has the cup been raised or lowered? In the very next poem, he starts off with “I like phrases” and weaves together a poem of from unrelated phrases. Many of the poems are simply snapshots of a moment in time leaving the reader to discover their importance or significance. In another poem, he speaks of the Vietnam Memorial and Captain Wayne Philip Bundy. I stop reading and research the name trying to attach historical significance to the pilot’s death which turned out to be a non-combat death over South Vietnam. I give up and went back to the poem only to learn the significance later in the poem. The significance was not to history but to the poet himself. One must read carefully and not jump to conclusions. There are answers in all the poems, however, we may not see them or even know the questions they answer. Read, contemplate, learn, repeat.