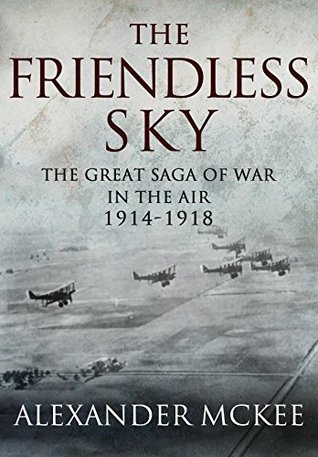 The Friendless Sky by Alexander McKee is a personalized look at aviation in the first world war. McKee was a British journalist, military historian, and diver who published nearly thirty books. Most of his books center on war and the military — Vimy Ridge, The Bounty, Dresden and many others.

As a child I was fascinated by WWI and especially the air war. I read Rickenbacker and Ernest K Gann. Other kids were interested in F-14 Tomcat or F-111. I preferred Fokkers and Sopwiths. Far from the late 20th-century cutting edge, the planes I liked were fragile and at times seemed, and were, to be held together by wire and glue. In combat the unlike modern planes that could engage from over one hundred miles away, first world war pilots were in visual sight of each other and close enough to read the markings on the each others plane. There is also a difference in the bombing. The Iraqi highway of death was something of pride while the same situation in Turkey during WWI proved to have the opposite effect. Modern cruise missiles and drones are indiscriminate in death. WWI bomber pilots, although very inefficient in causing damage, disliked bombing cities. One pilot even remarked, “What happens if I kill an old woman.”

The pilots on both sides respected each other and there are many instances where an enemy pilot would visit their opponents aerodromes and drop messages, news of shot down pilots, or even wreaths on the death of a respected pilot. Death surrounded pilots not only from air combat. Their planes could fall apart when pushed too hard. Ground fire could easily take down a plane. Easy targets became traps for pilots wanting to up their count. Death was always close but it had a glory the trenches could never claim.

Unlike many WWI air war books, McKee includes the history of bombing. From the observer dropping handheld bombs over the side of observed planes to the multiple zeppelin bombings of Great Britain. Bombing raids were not accurate and many times did little damage. A German bombing run on Paris released propaganda and bombs. The bombs killed a cow. German zeppelin raids were more successful in England. They were not very accurate and sometimes missed the target city entirely. The Gotha bombers may have appeared more threatening than zeppelins but were easier targets for air defenses.

McKee uses first-hand source material from pilots in the war as well as other sources. The effect is to give a personal look at the air war complete with individual pilot’s stories.The Friendless Sky does not read like history. It has a warmer, friendlier tone to it despite the subject matter. War on a whole is horror. It is run by governments their militaries. The armies, however, are made up of individuals, and the individuals have little to gain by putting themselves into the slaughter. Their stories bring a truthfulness to the propaganda of war.