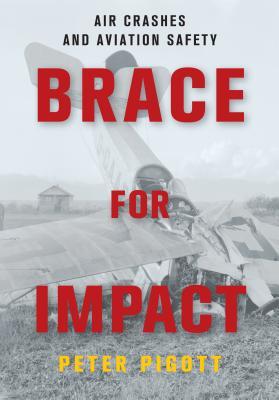 Brace for Impact: Air Crashes and Aviation Safety by Peter Pigott is a history of airline crashes from the Wright brothers to March 29, 2015. Pigott is Canada’s foremost aviation author. Among his accomplishments are the histories of Air Canada, Trans Canada Airlines and Canadian Airlines. He is the author of From Far and Wide, Sailing Seven Seas, Canada in Sudan, and many more books.

Flying is the safest form travel. You are twice as likely to die in a bus or subway accident than on a plane. What makes air travel deaths seem more prevalent is they tend to happen with greater numbers. Motorcycle deaths happen at a rate of more than 4,000 a year yet get little media coverage. Plane crashes are national news. I am old enough to remember the Tenerife disaster where two 747s collided on the runway killing 583 people. More recently in 1985, Japan Airlines flight 123 crashed into a mountainside killing 520 people. In my days of frequent travel, Alaska Airlines Flight 261 crashed into the Pacific Ocean. The plane was an MD-83 with a record of improper maintenance. Safe travel or not, I never flew on an MD-80 series plane again.

Pigot is Canadian and centers his research on Canada but includes the United States and the United Kingdom. In modern times, much centers around the type of plane Douglas DC-10 and Lockheed Electras took more than their share of bad press, deserved or not. Americans may remember the DC-10 in American Airlines flight 191 in in 1979. After taking off from O’Hare its left engine detached and the plane fell to the ground killing 273 including two on the ground. Improper maintenance was the cause of the crash but people remember the plane that crashed. Another example is the Arrow DC-8 on December 12, 1985. Flying American peacekeeping troops home from Cairo, it crashed on take off in Newfoundland after re-fueling killing 256 people. Icing on the wings was determined to be the cause but a long history of poor and missing maintenance. The late 1970s turned deadly, not necessarily from aircraft design, but arguably government deregulation.

Aircraft design improved constantly since its introduction. All one has to do is look at the 1903 Wright Flyer, a dozen years later a Fokker, twenty years later a DC-3, twenty years later a 707. Design incorporated safety. Three major improvements were ground radio guidance which kept flights on course de-icing boots on the wings and most importantly jet engines. The change from piston engines to jets nearly eliminated all engine failures as the cause of crashes. Twin engine 767s were allowed to fly over sea routes because engine failure is extremely rare — 1 in 375,000 hours. Piston engines fail at a rate of 117 times that rate.

Brace for Impact: Air Crashes and Aviation Safety show the continuing increase in aircraft safety from it’s totally unregulated beginnings to the 1970s bringing on deregulation. Although it is not spelled out directly in the book, today we see safer designed planes and it is rare that aircraft design is responsible for a crash. It is the human factor involved that is the cause today. A well-researched piece of aviation history applicable to both Canadians and Americans.