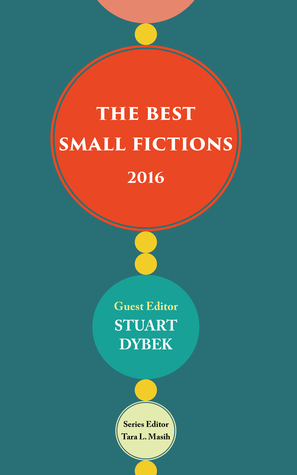 The Best Small Fictions 2016 edited by Stuart Dybek is the second annual collection of short fictions from around the world. Dybek is the author of five collections of short stories and two poetry collections. His awards include a Lannan Prize, a PEN/Malamud Award, a Whiting Award, a Guggenheim fellowship, and four O. Henry Awards. Dybek was awarded a MacArthur Fellowship in 2007.

Tara Masih, the series editor, has won multiple book awards as editor of The Rose Metal Press Field Guide to Writing Flash Fiction, and The Chalk Circle: Intercultural Prizewinning Essays. She is the author of Where the Dog Star Never Glows: Stories and has published fiction, poetry, and essays in numerous anthologies and literary magazines.

This is the second year I am reviewing The Best Small Fictions. Not being a short story fan I found small fictions a welcome change. The stories range from two or three pages down to Tweets. There is also a complete story in each of the small pieces. In order to complete this with a small word count is akin to poetry. Like poetry, words need to convey more than a simple message and must be chosen carefully.

As an undergraduate, I had a history professor who would throw down a stack of blue books filled with essay answers and sarcastically say, “Why use one word when twenty will do?” We Americans tend to be wasteful with everything including words. Bigger is better and more impressive to most. Craftsmanship and intricate workings have been replaced with mass production. Short fictions aim to change this. Interestingly enough this can be seen in the first story, “Bless This Home” by Rosie Forrest. When asked how she could doubt something without even looking, the narrator responds, “My doubt is significant.” Four words take the place of a long explanation and deliver the same result but with a powerful elegance. In Paul Beckman’s “Healing Time,” the narrator refers to his sister as “Cleveland sister” which explains much about the relationship with his sister and the rest of the family without pages of details. The reader is challenged to think about the characters, setting, and story. Nothing is simply handed to the reader. It is an intellectual summons.

The stories range from a few pages down to twenty-five words. Many of the stories have a serious tone, but surprisingly Michael Martone’s twenty-five-word story also has a twenty-five-word title — playing jest with the shortness of the story. These stories have appeared in Fiction Southeast, Tahoma Literary Review, and many other publications. Also appearing are two stories from Rift, a joint effort between Kathy Fish and Robert Vaughan, which I reviewed last year.

The stories this year cover a range of topics. Admittedly, some stories took reading through twice before I fully grasped the context. Stories like Amelia Gray’s “We Are the Fables” hit hard on the first read. Janey Skinner’s “Carnivores” views a family and a neighboring spider plant through the “eyes” of a Venus fly trap; it is an interesting perspective told in just three pages. “Illusions” by Curtis Smith brings together reality, fantasy and where they blur. The authors take the reader from nuclear fusion (Laird Hunt) to mental breakdown (Nancy Ludmerer) and everywhere in between.

The Best Small Fictions 2016 lives up to offering the best in the field. All the stories in the collection offer the reader something unique. Although I am fairly new to short fictions,they have been growing on me over the last year or so. These stories show that there is much more to a short fiction than being a “small” story. It is a craft and an art that shows that greater things can be delivered with fewer words.

One response to “Book Review — The Best Small Fictions 2016”