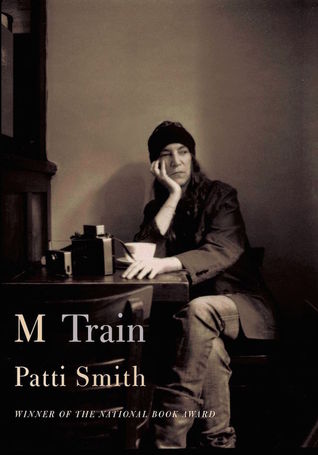 M-Train by Patti Smith is a collection of stories by the poet laureate of punk rock. Patricia Lee “Patti” Smith is an American singer-songwriter, poet and visual artist who became a highly influential component of the New York City punk rock movement with her 1975 debut album Horses.

To be honest, I have been a Patti Smith fan since 1978. I have all her albums, seen her in concert, and own several of her books including number 86 of 100 of WIIT. I was really surprised at how well received and the broad appeal of Just Kids and I was interested in seeing how well M-Train would fare.

I waited a while to start this book wanting to hold on to the idea of a new Patti Smith book before risking disappointment. I saw one review that talked about coffee and mentioned the word was mentioned forty-seven times. Actually it is mentioned 135 times including Nescafe, “joe” and beans. If you include cafe to the tally and it jumps to 223 which is pretty impressive for a 250 page book. Patti Smith does love her coffee.

I both read and listened to this book. Patti Smith is a great storyteller. Her stories are not so much exciting and with a twisting plot but more like catching up with an old friend over a … cup of coffee. There is a familiarity in her way of speaking from plain speech dotted with big words to pronouncing yellow and bureau “yellah” and “bureah.” The stories are “just so” and believable. She knows many people, but it never sounds like name dropping.

I enjoyed M-Train perhaps more than Just Kids. It seemed more personal rather than “look where I came from and how hard it was.” Of course like I said before, I am and have been a lifelong fan. To me, this was like catching up with a long lost friend. Reading was time well spent.