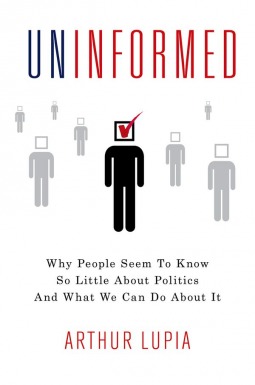 Uninformed Why People Seem to Know So Little about Politics and What We Can Do about It by Arthur Lupia is a study of the American political public and what can be done to improve the public’s political knowledge. Lupia is the Hal R Varian Collegiate Professor of Political Science. He examines how people make decisions when they lack information and in how they manage complex information flows. He draws from multiple scientific and philosophical disciplines and uses multiple research methods. He earned his Ph.D. in political science from the California Institute of Technology and currently teaches at the University of Michigan.

Who is the Chief Justice of the Supreme Court? Who is your state senator? Who presides over the senate? Chances are most people will not know the answers to these questions. We, as a nation, are ignorant of the system government. Although every four years, we campaign and vote for president, whom we do not directly elect. The candidates call each other names. We call those who oppose us Socialists or Nazis without fully understanding the words. It is turned into a sporting event on par with the Super Bowl — Red versus Blue. My team is going to beat your team. “We are the job creators” … “No, you are the war creators.” We only believe certain news personalities, because they say what we want to hear…regardless of the truth. In fact, there are great numbers of people who are convinced to vote against their own interests. Last year a news story came out about the region with the highest Food Stamp usage. It was not Compton, Watts, Harlem, or the Southside of Chicago. It was Owsley County, Kentucky a region of 5,000 people 99% white and 92% Republican. The region was hit hard by a decline in coal, tobacco, and lumber and it has the lowest median household income in the United States. Yet the people helped vote in congressmen who cut their benefits. What causes that behavior especially on that scale?

Lupia goes through great lengths to explain what can be down. He uses studies and game theory to show his point. As far as educating the public on the form and process of government along with who was elected is spot on. The problem I see is educating the public on issues. First we tie issues to parties and assume all Democrats are liberal and all Republicans are conservative. A real conservative would not be Pro-Choice and for gun control unless he was “govinator” of California. Parties and the lack of party discipline present a problem. To complicate that there are even differences on party platform issues. Where do you fit if you are pro-life and oppose the death penalty? There are too many variables to arrive at concrete answers.

A problem I noticed is in educating people on issues. That becomes a very slippery slope. What separates an educator from a lobbyist or interest group (except for money)? We all have our own biases. Say, for example, I do not support GMO products. I conduct research, have studies done and proceed to educate the public. Monsanto with almost unlimited resources and political connections does the same. Whose message is going to have the most effect on educating the public? Another example. When did science find out that cigarette smoking is harmful compared to when cigarette companies finally admitted smoking was addictive and were sued? I am afraid money speaks more than education in American politics. Power/money trumps education almost every time.

One thing I was very happy to see in Uninformed is participation in local politics. The American public, in general, ignores local politics in favor of national politics. Your vote for president or senator is one amongst the voting population in your state. For example in Texas, there are about fourteen million registered voters so my vote for senator or electors to the electoral college is 1/14,000,000. My city councilman was elected with 251 out or 320 votes. My vote was 1/320. My vote in local elections carries much more weight. Also, if I could easily canvass the precinct for issues or candidates I supported. My effect would be much greater at local levels.

Uninformed takes on a herculean task of trying to educate the public on basics of government. Some of the information is very good and some seem to work well under controlled situations. There is one thing Lupia does well and that is to show we are very ignorant politically. We have given up reason in exchange for bread and circuses. We sit and watch as our country self-destructs, blaming the “other guys” rather than doing anything to fix it.