Book Review — One Man Against the World: The Tragedy of Richard Nixon

He was (Nixon) — as an English earl once said of warlord Oliver Cromwell — a great, bad man. 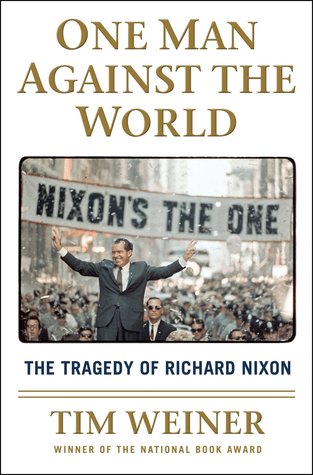 One Man Against the World: The Tragedy of Richard Nixon by Tim Weiner is a unique history of a president. Weiner reported for The New York Times for many years as a foreign correspondent and as a national security correspondent in Washington, DC. He has won the Pulitzer Prize for National Reporting and the National Book Award for Legacy of Ashes: The History of the CIA.

There are probably only a very few who would argue the Nixon presidency was not a failure. The very high points of his presidency should have created a lasting legacy of greatness. Man walked on the moon and returned safely on his watch. Mao and Nixon met and established diplomatic relations tilting the balance of the Cold War. Nixon was the first president to visit the Kremlin and engage the Soviets in arms control. He beat McGovern is an unprecedented landslide. Nixon should be sharing a spot with the greatest presidents.

However, the Watergate break-in and cover-up canceled everything. The House voting on three articles of impeachment and Nixon’s resignation destroyed his presidency and America’s faith in its government. Everything above is fairly well known and shouldn’t surprise many. I was barely old enough to remember the news about the Nixon tapes and executive privilege; I was ten at the time and learned what impeachment was. Of course, there was the Vietnam war too and all the peripheral secret bombing that went along with it.

The above is all well recorded in history. What makes One Man Against the World unique in the historical perspective is that it gets inside Nixon’s head and personal habits. Nixon’s drinking was well beyond social and seemed to be his escape in much the same way a junkie would use heroin. It wasn’t used to relax. It was used to obliterate the outside world.

Perhaps the strangest part of “the most powerful man in the world” was his loneliness. It was not from the lack of people but from his fear and paranoia. Politics taught Nixon not to trust anyone and as president that paranoia reached heights that were on par with the space program. He distrusted and did not hold high opinions of those in his own party. He thought of Reagan as a light weight and Ford as a decent human being, but not the brightest guy around. Foreign policy was no different. He hated India and did what he could to covertly support Pakistan. As a president who did not win his first term with a majority, he overthrew another leader who also won with a plurality. He believed the president’s role was foreign policy and was frustrated when the most powerful nation in the world could not get its way despite overwhelming military superiority.

Weiner spends a great deal of the book on Nixon’s two greatest obsessions: Vietnam and his enemies. One Man Against the World looks more at the person Nixon actually was from newly released information. Nixon is examined outside of the historical events as the man he was and the man who lead this country. America has elected bad presidents, but Nixon devolved into being a bad person as well as president. Despite questionable recent presidents, questionable wars and drone attacks, spying on the American public, torture, and secret prisons, Nixon still stands out. Weiner presents a biography that is disturbing. It shows how little the American people actually know about the person they elect — the real person, not the image and sound bite.

4 responses to “Book Review — One Man Against the World: The Tragedy of Richard Nixon”