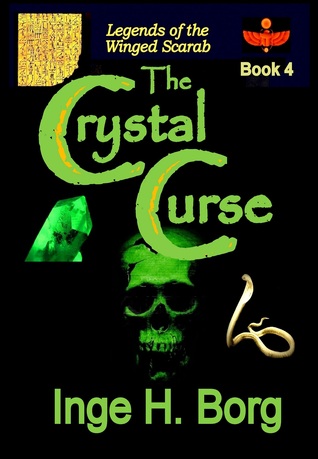 The Crystal Curse is the fourth book in the Legends of the Winged Scarab collection by Inge Borg. The series has remained fresh and holds to a world that is not beyond the reader’s usual suspension of disbelief. There is action, adventure, and treachery throughout the series. It’s a bit like Indiana Jones, but better.

The series ranges from ancient Egypt until the present. The main characters, Jonathan and Naunet, have survived shipwrecks, kidnapping, revolution, volcanic disasters, and the high seas. Together they meet their sometimes friend and sometimes foe Jabari El-Masri, former head of the Cario Museum, who seeks personal gain as much as he seeks to preserve ancient history. A few characters from the previous books also make an appearance here to add to Jonathan and Naunet’s discomfort.

With the United States out of the picture (After the Cataclysm) and Europe hurting from the effect, a group of eight have plans to divide up the world and start a new paradigm. The fifty gold plates are still in play along with their translation. There is even some “magic” in crystals when held in the right hands, but it really does not seem out of place or act as a spoiler. Borg’s knowledge of all things nautical and her knowledge of the history and geography of the Mediterranean outshine any spark of the supernatural in the series.

The novel runs a fast pace but is well thought out. The plot is solid and the settings are very well described to the smallest detail. The characters both old and new all seem real and hold real ambitions for either good, evil, or their own self-interest. Detailed new characters are limited and fill in necessary roles without overburdening the reader with an army of characters to keep straight. This is helpful as the rosters for good and evil seem to change as quickly as it benefits most of the characters. The new characters are not just to fill in the plot. They play pivotal roles, and I took an interest in Vergil from the first meeting.

The reader could pick this book up without reading the rest of the series, but that would risk missing much of the detailed story. The novels build perfectly one after another with all of them telling part of a great story. Although each story is self-contained, this one like the previous books leaves enough room to allow a continuation. Spending most of my time reading non-fiction this book came at the right time. Despite some mystical references, the story flowed unfettered through my fact processing brain. I would hate to say this is the best book in the series, but it does raise the level of the series; it just keeps getting better.