This is a book for guys who watch Caddyshack at least once a year. 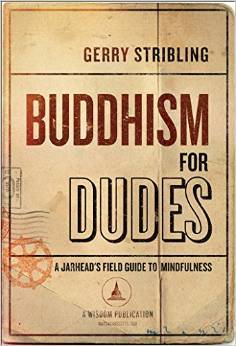 Buddhism for Dudes: A Jarhead’s Field Guide to Mindfulness by Gerry Stribling is an introduction to Buddhism written by a former Marine with a masters in education from the University of Louisville. He has studied Buddhism in Sri Lanka and in 2003 he was awarded the title of Dhammaduta, lay teacher of Dharma.

As a Marine myself, I found it hard to pass up a book on Buddhism written by a fellow Marine. Being a Marine in itself requires breaking a few precepts and not quite hitting the Eight Fold Path head on, and that’s all before breakfast. However, a disciplined and a regimented lifestyle fit in and surprisingly Stribling explains Right Effort, Right Mindfulness, and Right Concentration into Marine guard duty. Stribling breaks Buddhism down so a Marine can understand it. It’s not that we aren’t smart; it’s just our focus and job description points us down another path, so to speak.

To most Americans over fifty Buddhism is the burning monk protesting the Vietnam war. To the younger generation, it is the Dalai Lama. But Buddhism is not symbolism it is being a stand-up guy, someone who will not let you down. It’s not about Buddha; it’s about what he said. Buddha was not a God and did not have all the answers. In fact, Buddha did not talk about God or deny God. His mission was the dharma. Stribling at one point calls Gautama (Buddha’s real name) a dharma bum, which immediately put the Kerouac novel of the same name into my head. Buddha was an ordinary man who lived and died.

There are some comparisons to Christianity and the discussion if Buddhism is a religion or a philosophy. The Four Noble Truths, The Eightfold Path, and the Five Precepts are discussed and explained in clear and sometimes humorous language. For example, one of the Five Precepts is not to kill. The concept of not killing is not rationalized. It is simply something that should not be done. But you can defend yourself, it is natural. War is not. There are no wars carried out in the name of Buddhism. Killing of animals follows the same logic. A rabid dog about to bite your daughter is a problem. You, as anyone, would kill the dog before it bit your daughter. It is the logical thing to do. It is the human thing to do. The killing, however, has consequences. Each time you kill makes it easier to kill again and what happened under extreme circumstances may now happen in lesser circumstances. That is the problem even when you kill in self-defense.

Stribling gives a great explanation of death and its results in a eulogy he wrote. It is as logical and as scientific as it is philosophical. Buddhism provides an unclouded way to look at, life the universe, and everything. Buddhism for Dudes is simple and easy to follow but written well enough that it can be read and reread over again. Why is it for dudes and not dudettes too? Simply because the author is male and clueless about women despite being married for forty years…I think it has something to do with the morning meditation ritual. A great read. Informative, entertaining, and will stick in any Marine’s (or average Joe’s) brain housing group. I loved this book and that’s something I don’t often say.

4 responses to “Book Review — Buddhism for Dudes: A Jarhead’s Field Guide to Mindfulness”