Book Review — The End of Automobile Dependence: How Cities are Moving Beyond Car-Based Planning 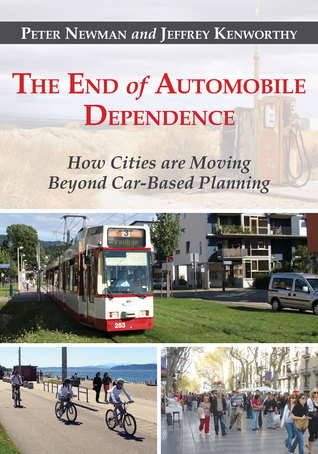 The End of Automobile Dependence: How Cities are Moving Beyond Car-Based Planning by Peter Newman, Jeffrey Kenworthy is the third book in what is a study of moving from car dependent society. Newman is an environmental scientist, author and educator based in Perth, Western Australia. He is currently Professor of Sustainability at Curtin University and since 2008 a member of Infrastructure Australia. Kenworthy is a guest lecturer at Frankfurt University of Applied Science. He is on the faculty at Curtin University and supervises postgraduate students in urban sustainability fields. He has 35 years experience in urban transport and land use policy with over 250 publications in the field, he has lectured in 30 countries and 79 cities throughout the world, and he has authored numerous books and publications, includingSustainability and Cities with Peter Newman.

This is a book I would like to walk into a city council meeting and thump on the table before the council and say “Read it.”. I live in a suburb north of Dallas and it is car-centric to say the least. Sidewalks randomly end. Streets in housing divisions do not line up making it nearly impossible to cross the major streets — three lanes in each direction and (a mostly unenforced) 45 mph speed limit. There are walking trails, but the pedestrian or cyclist is on their own when crossing six lanes of traffic. The city boasts miles and miles of bicycle routes, but the only difference between bike routes and other streets are that one has signs the other does not. School zones are a hazard for anyone on foot or a bicycle. I have been advised by the police that it is too dangerous to ride a bike in the school zone and I should find another route. Currently the city is ripping up the green center islands on boulevards to add extra lanes for cars — not bike lanes or sidewalks.

The End of Automobile Dependencies brings up a rather obvious key point; We are at peak car capacity. We are running out of room to add more lanes, we have smog days, and we spend too much time commuting. Of course light rail (which interestingly cost about the same as road expansion mile to mile) could handle much more traffic and higher speeds than cars but people do not want to give up their cars. In Texas, too, there is the mentality that building and supporting public transportation is called subsidizing (socialism), but building roads is called investment in infrastructure (capitalism). This is sad for a nation that was built on rails. This book explains that different cities developed in different ways. Old cities were compact and walkable. Store owners lived above their shops and the butcher, baker, and corner stores were all in walking distance. After World War II the car culture began and suburbs were built and cars became common, by the seventies sprawl made cars an absolute necessity. There are even subdivisions here that do not have sidewalks, only a concrete path from your front door to the street where you park your car.

After recognizing the key point, it is not all doom and gloom. Newman and Kenworthy examine practical and workable solutions that have been used around the world. They make case studies of cities in the US, Canada, Europe, Asia, and South America. China, for example, is seeing early on what car culture is doing to its cities and is working to limit the number of cars that are licensed. Other cities bar or limit cars from city centers. If the majority of employment occurs in certain areas light rail is a smart option over multilane freeways and massive amounts of land needed for parking. With Google Maps, take a satellite look over your city and look at all the land tied up in parking — Malls, Junior Colleges, factories, and corporate centers. Each of the cities looked at found different solutions to their transportation problems. Public transportation, walking, and cycling are used to some extent. The idea that cars mean prosperity is challenged in several places including Vancouver which rejected a highway system through the city in the 1970s. It is a prosperous city and one where getting around is not a problem. Seoul, South Korea, and Portland removed sections of highway and now have better traffic flow and nicer public areas.

The End of Automobile Dependence is filled with studies, facts, and graphs. It has case studies on the effects of change in cities. It presents an excellent case against suburban sprawl.This is the answer book. The problem is with detailed information like this, no one will challenge it, they will simply ignore it. Why fight a losing battle? Still some people are listening. The younger generation is moving away from car ownership. Some cities are making the move to make it safe for bicycle commuting. City centers are seeing a renewal and revival as people are starting to look for convenience. There is hope, but we (at least Texas) are spending millions against that hope.

As I opened with, I would love to take this book to city hall, but I realize it would do no good. The people on the council are elected by voters. Those voters drive cars. They drive cars to go to the park and walk. They load up bicycles into cars and drive to ride bikes. Even walking and cycling here are tied to cars. But, unless the city is willing to infringe on property owners and widen streets into their yards, there is not much expansion left. We have light rail, but we are the terminus of the route. The city to the north refuses to allow light rail through their city because it would bring riff-raff. I don’t drive and public transportation is several miles away. I walk six miles to work and six miles home. Occasionally I take a risk and ride a bike but the risk usually outweighs the benefit. I was run down from behind by a car last year and although not badly injured I was told by the police that if I rode faster I wouldn’t get run down. So as much as I see the truth and benefit in this book, it is going to take something dramatic or catastrophic to change the thinking of the local government and the priorities of the local police. This is north Texas and sad to say if you want to walk, drive to the park.

3 responses to “Book Review — The End of Automobile Dependence: How Cities are Moving Beyond Car-Based Planning”