Book Review — The United States of Excess: Gluttony and the Dark Side of American Exceptionalism 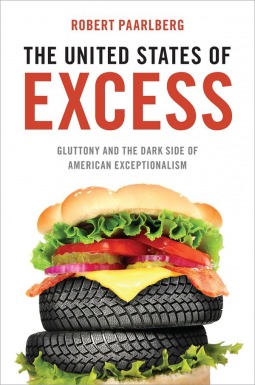 The United States of Excess: Gluttony and the Dark Side of American Exceptionalism by Robert Paarlberg is a look at America’s love of conspicuous consumption. Paarlberg is a professor at Wellesley College and Associate at the Weatherhead Center for International Affairs at Harvard University. He has written several books on food policy and politics including the very comprehensive Food Politics.

Back in the 1970s I remember a television called Good Times, the main character JJ would talk about the good life that was coming his way when he’d “Sit back in my Cadillac and have a Big Mac.” The American dream, even for the poor in the television show, seemed so desirable back then. Looking at that line today, forty years later, it reflects on what is wrong with this country. We have become wasteful and energy hungry society coupled with an ever growing obesity problem and a dietary nightmare. It’s like we took a simple line and carried it to the extreme.

We have changed as a country. Office chairs used to be rated at 300lbs, now they are rated at 600lbs. The new Yankee stadium was built with wider seats. Airlines like SouthWest will charge you for a second seat if you cannot fit into a single seat. Almost a quarter of our calories come from eating outside the house from 5% in 1960. The rear view camera and dashboard display in modern cars may be convenient, but for many too big to turn around in their car seat it is the only to look back. In 1969, 40% of children walked or rode a bike to school. By 2001, that percentage dropped to 13%. Less than half the adult population gets three hours of exercise a week.

We like to drive and not just any cars. We like big cars. We like big houses all of which take more energy to heat and cool. America uses one-quarter of the oil used every day in the world. Advanced countries in Europe and Japan use far less energy and maintain a comparable standard of living, if not better. We trust our corporate lead economy. We allow our government to fall into the hands of lobbyists. Our school lunch program is declining in quality and reason. In the 1980s, we laughed when Congress considered ketchup a vegetable, but today pizza is considered a vegetable because it contains tomato paste (Schwan and Conagra lobby). French fries also count as a vegetable (potato lobby).

Paarlberg covers many areas including the public and governmental belief/disbelief in global warming, alternative fuels, and why Americans use so much fuel in their daily lives. It is not a book that points fingers as much as it is used to explain why we are the way we are, how we got there, and why we stay. Our diets and lifestyles have evolved, and Paarlberg explains the history and guides the reader down the complex path. A very fact filled and interesting read.