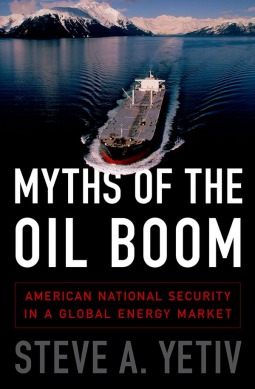 Myths of the Oil Boom: American National Security in a Global Energy Market by Steve A. Yetiv is a complex look at the international oil market. Yetiv is the Louis I. Jaffe Professor of International Relations at Old Dominion University. He has been a consultant to the U.S. Departments of State and Defense; the U.S. General Accounting Office; and CNN International where he worked on a documentary that won an Edward R. Murrow Overseas Press Club Award.

This book was a rather unexpected find for me. First, it covers very recent events in a very scholarly format. Most books looking this close to the present tend to be patchworks of news articles and what can be found on a quick web search. This book is well documented and well written. Second, this book took right back to graduate school where I worked on my Masters in International Relations, security policy. The thinking and positions put forth in this book fell right in line with what I learned years ago. The last point I am a bit embarrassed about. I did not know the US was enjoying an oil boom from shale fracking. I haven’t bought gasoline in many years and really did not pay much attention to it. I did, however, know about the natural gas boom.

Yetiv goes into great detail explaining the workings of the oil market and what effects an American boom would have on prices. It affects more than the US. Russia is suffering from lowered oil prices. The expected oil income is not enough to support government expenditures. The same dilemma is being experienced in other oil producing countries. On the other side, too high of oil prices will result in the loss of market share for OPEC countries. While Americans fear another OPEC embargo, in reality, it hurt OPEC just as well. America looked and bought from other non-OPEC sources and continued to do so after the embargo weakening OPEC’s share of the market. Conservation efforts also cut into the market share.

In the mid-1980s, the US reflagged Kuwaiti ships and provided a large military presence in the Persian Gulf. Twice late last century and this century the United States sent forces to the Middle East, Iraq in particular. A large portion of the world’s oil flows through the Persian Gulf. Yetiv explains why the US considers it vital to ensure the free flow of oil in the region. Surprising to many it has nothing to do with the US supply of oil. Sixty percent of our oil is imported but very little of it through the Gulf. Of our imports, 3/4 come from our own hemisphere — Canada, Mexico, Venezuela, and Columbia.

The US oil boom is also put into perspective. It is expected to peak in about five years. Others argue that technology will extend that peak into the future. Regardless, it is limited. The North Sea oil gave a boom in the 1980s driving the price of gas to under a dollar, but it did not last. Oil markets are complex as are the players. In America, we talk about Big Oil and its role. Most of the countries that we import from are not controlled by Big Oil. They are nationally owned. Nationally controlled oil has its problems ranging from corruption to managerial apathy. There is not the profit motive to drive these organizations. Therefore, their efficiency and willingness to develop new technology is lacking.

Myths of the Oil Boom is probably the most up to date scholarly look at oil security. It looks at the big and long term picture. Oil is vital to the world. We are a petroleum based world economy and as new powers are rising, China in particular, new concerns and threats to stability are realized. While America may fight wars for oil, China develops a foreign policy of cooperation with resource rich nations to secure its oil future. For example, while the world placed sanctions on Iran, China offered to buy its oil.

Our world has changed since the days of the Cold War. It is more complex and less stable. Results of Cold War policies are being felt, especially in America with the Middle East. Yetiv brings together all the complexities, clears misconceptions, and presents a clear picture of energy security. My copy of the book is thoroughly marked and noted; this is a book for those wishing to know what a course in international relations is like. Extremely well done and very relevant.

One response to “Book Review — Myths of the Oil Boom: American National Security in a Global Energy Market”