Punk Rock Blitzkrieg: My Life as a Ramone

I see countless people around the globe wearing Ramones T-shirts. That’s a good thing, but I wonder if it’s like Che Guevara worn by people who don’t know who Che Guevara is. Or if they can name the guy on the shirt. — Marky Ramone 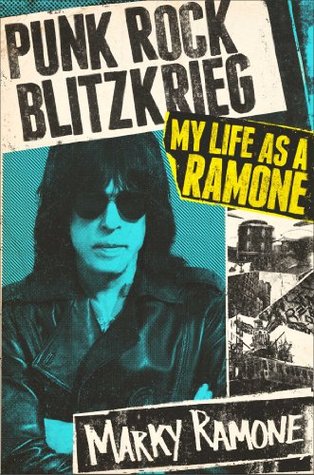 Punk Rock Blitzkrieg: My Life as a Ramone by Mark Bell is the autobiography of Ramones drummer Marky Ramone. Marky Ramone tells his life story which is more than his life as a Ramone. Bell is the longest playing member of the band still alive. Joey, Johnny, Tommy, and Dee Dee have all died over the last decade and a half. Various cancers took three members, and Dee Dee died from a heroin overdose.

The New York underground of the 1970s was a rough life and forty years later the list of survivors is small and shrinking. Last year Tommy Ramone and Lou Reed became memories. Of the small crowd that remains, it is good to see the history documented by Bell and others like Patti Smith. It was an important time in American rock music. There has been a steady stream of autobiographies out over the last year or two and all of them have proved to show a different side of the music. Keith Richards dove in with the drugs and a bit of self-congratulations. Neil Young wrote as a folksy, marijuana influenced, storyteller. Patti Smith wrote mostly of herself in her biography of Robert Mapplethorpe, and Bell tells his story which is much more than a Ramones story.

Most people can name a song or two Ramones. AT&T/Cingular used “Blitzkrieg Bop” as part of an ad promotion, leaving out the part of “Shoot’em in the back now.” People with a casual knowledge will tell you of glue sniffing and heroin. If you did not catch the Ramones in the 1970s, they seemed a bit odd and out of place. Perhaps what Kiss is to hard rock, the Ramones are to the punk movement — Innovators that left a mark and still have young fans today.

Bell takes us through is fairly normal early life in a middle class New York and into his early music career in Dust and his time with Wayne County and the Backstreet Boys. Wayne (Jayne) County was a transgender singer well known in the Max’s Kansas City clique. The band did not catch on it was a little too extreme even in the era of David Bowie and The New York Dolls. Bell had quite a start before even joining the Ramones. Once in the Ramones, Bell goes into a great deal of telling who the members were and what it was like being in the band. Johnny the boss and proud Republican. Joey and his OCD and physical ailments. Dee Dee the songwriter and “character” in the band who had more than a mild drug problem. Marky enjoyed drinking to excess. Among all the substance abuse, there is only one mention of the drug mostly closely associated with the band — airplane glue. That reference, however, was used in its proper context though.

Punk Rock Blitzkrieg takes the reader through a history of famous people of the era. Bell mentions meeting Jim Morrison, and when he mentions names it’s not name dropping. He was genuinely thrilled with meeting these people. Aside from the music, tours, and concerts, Bell goes into detail covering the making of Rock and Roll High School and the collaboration with Phil Spector.

Bell writes an amazingly coherent and detailed account of his life and his time in the Ramones. This is probably the most detailed history of the Ramones published and one that honestly details the relationships between the band members. Bell remarks that original members Joey and Johnny played over 2,200 shows together and despite differences managed to hold together for twenty years. This is clearly one of the best rock and roll biographies out there — honest, personal, and significant.

One response to “Punk Rock Blitzkrieg: My Life as a Ramone”