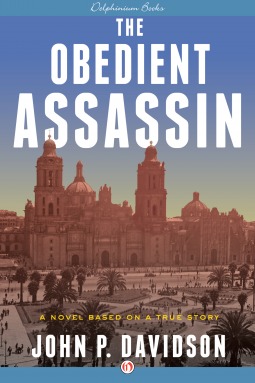 The Obedient Assassin by John P. Davidson is a fictionalized account the assassination of Leon Trotsky. Davidson is from the town of Fredericksburg, Texas. He was educated at the University of Texas earning a bachelors and a masters degree there with a break between the two in the Peace Corps. He has worked for several magazines as a senior editor and as a freelance writer. His first book was The Long Road (Doubleday, 1980).

I usually stay away from fictionalized histories because I usually become distracted by the details and historical inaccuracies. Trotsky’s split from the Soviet Union was something I never really studied. My interest in Russian history ended with the fall of Nicholas II, and I never spent much time studying the Spanish Civil War either. I figured this might be a good book to read for the story.

It starts with the Spanish Civil War and Ramon Mercader a solider fighting with the Republican forces. Essentially it was a war by proxy: The Nationalists were supported by Nazi Germany and the Republican forces by the Soviet Union. Many call the war Germany’s dry run for the invasion of Europe as the Nationalists perfected the blitzkrieg style of warfare. The Republicans are losing. One major problem the Republican forces were facing was divided leadership. Political struggle in the Soviet Union pitted the founder and leader of the Red Army, Trotsky, against Stalin. Trotsky was exiled to Mexico but still supported anti-Stalin Communism under the Fourth International. This split did not stand well with the Soviet Union. Plans were made to present a united front without Trotsky’s interference. Mercader was recruited by Soviet agents to assassinate Trosky and the real story begins.

The Obedient Assassin is quality storytelling. It is so good that at time it almost feels like you are in a movie. The setting, characters, and details are of such quality that you feel you are in a 1950s noir film. There is that same dark feeling in the reading: Soviet agents, spying, betrayal, and of course the story behind the ice axe. The main characters all seem to be real people from history, for example, in Mexico, Frida Kahlo and Diego Rivera are introduced to the story. All in all, this is a great bit of fictionalized history. It shows the ruthlessness of Stalin’s attempt to eliminate all competition and the long process from mission planning to execution. There may be historical inaccuracies in the story but none seemed to jump out at me. A very enjoyable novel.