Haiti where negritude rose to its feet for the first time and said it believed in its own humanity; and the comic little tail of Florida where they are just finishing strangling a negro; Africa gigantically caterpillaring as far as the Spanish foot of Europe; the nakedness of Africa where the scythe of Death swings wide. 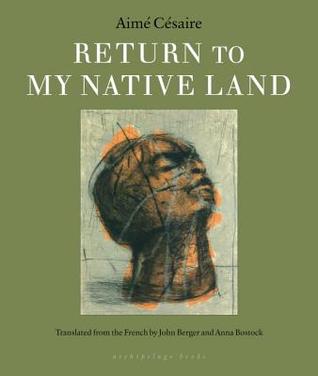 Return to my Native Land by Aime Cesaire a single poem by the African activist. Cesaire was born in the French Caribbean country of Martinique. He earned a scholarship to Lycee Louis-le-Grand, created the literary review L’Etudiant Noir. Cesaire returned to Martinique in 1939 and taught at Lycee Schoelcher. One of his students would play an important role in the French colony of Algeria, Frantz Fanon. Cesaire played a role in his country’s politics as a member of the Communist Party and later forming the Parti Progressiste Martinuqais.

Cesaire started writing Return to my Native Land (Cahier d’un retour au pays natal) in 1936 while while still in France. As a single poem it is rather long, but as a book it is short. Cesaire captures his feelings and emotions on returning to his home country after studying in France. Martinique is small. It covers 436 square miles and supports a population well under half a million people. Its history is typical of a Caribbean colony. Its native people were beaten down and expelled from the island. They are replaced with African slaves to work the new sugar plantations. The island changes hands from Spain in 1493 to the French in 1635, to the British during the Seven Years War and the Napoleonic Wars, and returned back to the French. The island suffered as a single commodity, sugar, economy which eventually lead to the freeing of the slaves in 1848. In 1946 Martinique became an Overseas Department of France and finally simply a department in 1974. It still relies heavily on French aid.

Cesaire was active in government and a communist for sometime. Some explanation communist is needed to understand exactly what it meant at the time. Countries like Martinique were under colonial rule and had little if any autonomy as a nation. There was also the much the same problems with the inhabitants of African descent after slavery ended, much the same as in the United States. The enlightened act of freeing the slaves was not followed up with assurances of liberty, equality, and fraternity. Cesaire makes this clear with the use of the derogatory term for a black man. Communism, as an ideal, took root in these environments. The promise of removing the yoke of colonial powers and the equality it promised all men was quite enticing. Here you have people who are being exploited and controlled by power thousands of miles away under a system called capitalism. To these people capitalism is not working so that simple leaves the alternative system. Their concerns are local and not exporting world wide revolution. They simply desired freedom.

Once you get a feel for the setting, which is very foreign for many, Cesaire’s words take on new meanings and a cause. It is not difficult to see the similarity in Cesaire and Fanon. Their styles differ the sledgehammer of Fanon and the velvet hammer Cesaire, but both seek to find identity beyond colonialism. Cesaire write in a mix of prose and poetry all of it lyrical in rhythm and surreal. At times I felt as if I was on a raft in the ocean rocking on the rhythm and intensities of Cesaire’s voice. The poem has a great feel to it that helps convey the pointed political and cultural messages. The lyrical feel reminded of reading the leaves of grass. You can lose yourself simply in the rhythm on the words. Here though, the message is as important as the art. Cesaire is more than just a voice calling for justice or the voice of protest. He is a French and captures that particular style that makes French poetry unique.

His literary style is classified as negritude a rejection of colonial racism and a term developed by Cesaire. He purposely chose to use the root Negre, the French equivalent to the American word “n*gger.” He took it as a proud title. Sarte said negritude is the Hegelian dialectic to racism. This is an interesting and unique look into colonial life and racism in a country other than America. Ceasaire writing is impressive. Berger and Bostock’s translation seems to be spot on. Steerforth Press has done a great service re-releasing this translation. The only thing that would have made it better would be a more detailed introduction for those without the historical background.