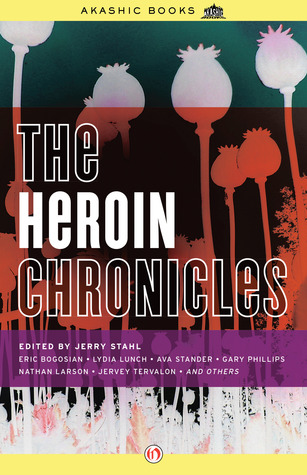 The Heroin Chronicles edited by Jerry Stahl is a collection of short stories centering on heroin as the lead character. Stahl gathers together several with several junkie writers, some ex-junkies and some not so ex and puts together an extremely interesting book. This is the third book in the series preceded byThe Cocaine Chronicles and The Speed Chronicles,

Heroin is the godfather of street drugs, or at least that is what I remember from my impressionable years in the 1970s. Cocaine was the rich people’s drug and from news reports it seemed to flow freely out of fountains at Studio 54 (and apparently into Stevie Nicks in great quantities). Speed was all pharmaceuticals. Those were the days before cocaine turned into crack and speed into meth. Then heroin was the king. What rock star didn’t do heroin? Lou Reed sang more than one song about heroin. America was lost in a desert with a horse with no name. Rock stars were glorious but we were constantly reminded on cop dramas about junkies and who would ever want to shoot up when all it would lead to is a good hearted, tough cop handcuffing you to a radiator or bed until you finished withdrawals. It was not a pretty picture, but people who should know better still jumped on that train.

When you pick up a book about heroin, you are never sure what you are going to get: Keith Richards the functional addict, Hubert Selby Jr’s surrealistic look, or William S. Burroughs’ hard reality. I didn’t recognize the writers, with the exception of No Wave founder Lydia Lunch of the New York underground, so I wasn’t sure what to expect.

The Heroin Chronicles gives stories from different sides and experiences. The book opens with a story of rehab and love gone wrong. Stories involve a woman outsmarting everyone, a man whose addiction talks to him much in the same way a little devil whispers into a cartoon characters ear, and a unique way to get your fix for free. Lydia Lunch explains why you should never answer the door at five forty-five on a Sunday morning.

The Heroin Chronicles cover a wide variety of experiences all concerning heroin in some way. The book is not necessarily dark and dreary nor is it by any means a glorification of drug use. It too is not a “Scared Straight” book either, but a literary look into a subject and substance that is considered taboo in society. Some of the stories seemed light, others had the feel of an action-drama, and one took place sometime in the future. It is a unique look at people’s lives written by people who are or were there before. I enjoyed this collection of short stories which is out of the ordinary for me. Rarely do short stories seem so satisfying to me. For me, at my age, these stories reminded of what that dark ledge to oblivion was supposed to be. How these stories hold up with the younger generation and much stronger drugs, I am not sure, but the stories are well worth reading if not for the subject matter, for the literary value, Highly recommended.