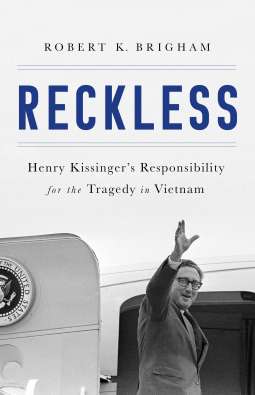 Reckless: Henry Kissinger’s Responsibility for the Tragedy in Vietnam by Robert K. Brigham is a study of Kissinger’s role in the Vietnam peace process. Brigham, Shirley Ecker Boskey Professor of History and International Relations, joined the Vassar faculty in 1994. He is a specialist on the history of US foreign policy, particularly the Vietnam War.

For students of international relations, Kissinger is a powerhouse. He is often credited with creating the modern Realist Theory that opposed the Wilsonian Idealist position. Kissinger is also responsible for volumes of work on historical foreign policy. American policy in most situations has been driven by the realist model. A notable exception is the first Gulf War where a where a large coalition worked together extending beyond traditional allies. The inconclusive results of that conflict seemed to further instill the realist theory as America’s policy.

Kissinger is also known for his tough stance against North Vietnam and the relentless bombings. What is new in Brigham’s book is a clearer role of Kissinger’s involvement with the Vietnam peace process. Brigham shows a Kissinger that is unsure, untrusting, and secretive. He blocks others including Secretary of State Rogers and Secretary of Defense Laird. Both men had experience and the people under them to help settle the peace. Kissinger explained to Oriana Fallaci that he was a lone cowboy and that was admired in America. Kissinger believed only he knew what it took to end the war and worked against anyone who he disagreed with or would steal his spot.

Forty-five years after the direct involvement of US troops in the war, new information is coming to light. Kissinger has written volumes of information on the war and his role. His works secure his place a statesman, but there is more too it. Brigham makes the comment:

Like the internet, Kissinger provides huge amounts of apparent information, not all of it reliable. He’s a conspiratorially minded theorist, and he often wanders far from the facts.

Reckless shows the costs and dangers of a “lone cowboy” running foreign policy.  Although Kissinger thought back channels would provide a faster solution, our country had the channels for open communication and the bureaucracy that is not driven by ambition or personal emotions.  Kissinger was very much like Nixon needing to be in charge and untrusting of almost everyone.  He believed that his intelligence and America’s military might could provide all of America’s solutions in Vietnam.  However, he lacked the understanding that the Vietnamese had been fighting outside powers since 1887 and were not about to give up.  Reckless tells the story of hubris and failure in contrast to the polished history written the subject himself.