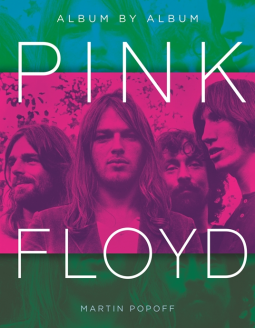 Pink Floyd: Album by Album by Martin Popoff is an album by album discussion of the band Pink Floyd. Popoff has been described as the world’s most famous heavy-metal journalist, though he has covered plenty of Punk and New Wave albums in his career of 7,000-plus album reviews. He has penned many books on various bands, genres of rock, and record collecting, including Voyageur Press’ Rush: The Illustrated History; Metallica: The Complete Illustrated History; The Art of Metal; and The Big Book of Hair Metal. He has also worked on film documentaries about Rush and ZZ Top.

Pink Floyd is one of the biggest names in rock history. Dark Side of the Moon remained on Billboard for fourteen years and sold over forty-five million copies. The Wall took over the radio on boom boxes of my high school years. Animals remained one of my favorite albums of all times and I remember wearing out a copy of Wish You Were Here on 8-Track. Pink Floyd offered a something different than what Van Halen, AC/DC, and other hard rock groups offered. With the exception of “The Nile Song,” there was not much heavy and hard with Pink Floyd, but it fit right in with the rock of the day.

Popoff covers Pink Floyd’s discography in a richly illustrated large size book. Instead of writing about the albums and songs with his thoughts, Popoff turns to interviews. Dennis Dunaway the bassist, songwriter, and conceptual artist for the original Alice Cooper group is interviewed for Pink Floyd’s first two albums — Piper at the Gate of Reason and Saucerful of Secrets. Roie Avin of The Prog Rock covers the some of the later albums. Three musicians made up the interview on Animals. Not to be excluded, Popoff also includes interviews with sound engineers to complement the words of musicians and the media.

A very well done discography filled with first-person experiences with the band and all it works to include live albums such as Pompeii. A very well executed project that produces results that will be enjoyed by anyone with an interest in Pink Floyd or their music will appreciate.