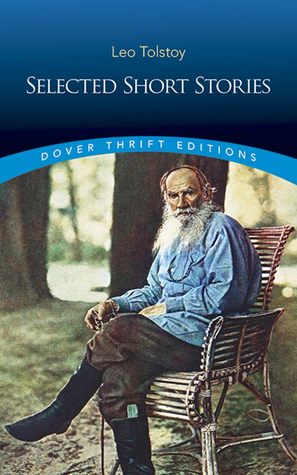 Count Lev Nikolayevich Tolstoy better known in the United States as Leo Tolstoy was a master storyteller. Perhaps best know for long novels like War and Peace and Anna Karenina.  His longer works turned many a student off by the sheer size of the book.  Once started, however, the books seem to flow and grow on the reader.  The bulk of the book itself is lightened by the storytelling.  Tolstoy is also known for his shorter works.  My introduction to Tolstoy’s short stories was “The Cossacks”.  Years later a friend in Minnesota got me to  “Master and Man” as a reminder of the real cold I was missing in Texas.  Recently another friend got me to read Anna Karenina and still the ice skating scene burned into my memory — Book 1 Chapter 9.

This collection by Dover Thrift Editions brings stories that reflect the nature of Russia herself.   War, winter, and of course bears take center stage in this collection of nine stories.  These are lesser known writings, in fact, “The Forged Coupon” is the only one I read before.  Although holding the rank of count, Tolstoy captures the not only the nobility but also the peasant class in his writing.  A serf in his stories is as important as a nobleman. This gives the reader a feeling of what it was like to be part of Imperial Russia’s 99%.  Tolstoy had an empathy that reaches deep into common Russian Culture.

In this collection “Alyosha the Pot” shows the life of a majority of Russians.  This is my favorite story in the collection.  It is very different the others because it deals with domestic issues of a common man.  Alyosha’s life is controlled for him. His every move seems to serve the interest of others.  His one wish for himself is lost in the service of others.  He becomes happy with his life much likes Camus’ Sisyphus embracing the absurd.  Where many would see defeat, Alyosha seems to feel a victory.

An excellent collection of Russian Short stories.  They capture the spirit if not the reality of life in Czarist Russia.  Tolstoy’s writing (and the translation) presents clear and flowing stories with easy to identify characters and storylines.  His writing remains timeless and fable-like easily holding the reader’s attention.  A great collection of stories to read over a cup of coffee and being Dover Thrift Edition it won’t set the reader back more than a cup of coffee at the neighborhood coffee shop.