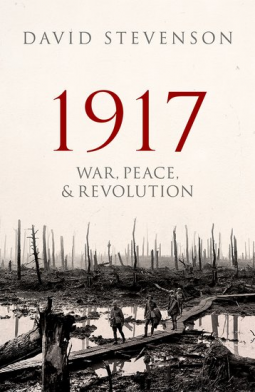 1917: War, Peace, and Revolution by David Stevenson is the history of a single year of World War I.  Stevenson studied for his undergraduate degree at the University of Cambridge, before receiving a Ph.D. from the same university. He became a Lecturer at the London School of Economics in 1982. In 1998, he was appointed Professor of International History. Between 2004 and 2005, he also received a Leverhulme Research Fellowship “for research on supply and logistics in 1914-1918”

The war had been fought to a stalemate for the last two and a half years.  Its toll was growing on the population of Europe.  England was near bankruptcy and running low on food.  It required a great deal of imported food as well as oil to fuel its fleet.  Germany was going through its turnip winter.  The Russian population was suffering more than ever — food shortages, loss of life on the front, and a vodka ban.  France was mostly self-sufficient in foodstuff, but it was being bled white.  Germany remained effectively blockaded.  It, in turn, tried to blockade England with unrestricted submarine warfare.

1917 was a year of risks and taking chances hoping for a breakthrough that would finally turn the tide of the war.  England had turned to the United States supported convoys.  Germany stepped up its submarine warfare knowing that it would bring the United States into the war.  Germany underestimated US strength and overestimated its advantages of Russia leaving the war and its own submarines.  Germany’s main ally the Austrian-Hungarian Empire was falling apart quickly and proving to be ineffective.  England’s large navy remained essentially out of the war and its army was still small.  France was bearing the burden of being the main ally army although the British commonwealths were fighting bravely.

Peace advances from the Vatican and Wilson were rejected by each side neither wanting to back down.  There was the hope and belief that each side was nearing its breaking point and it was just a matter of time and lives before victory would be claimed.   Russia’s exit from the war created a race to bring the US into the war before the German’s could transfer resources.  In a further overestimation, Russia left the war giving Germany favorable terms because Russia thought the rest of Europe would fall into revolution shortly and differences from the hasty peace would be corrected with a communist Germany and Europe.

What makes this book on World War I special is that Steveson does not only concentrate on the Western Front.   Germany’s invasion of Italy and Japan’s attack on German colonies and ships are covered.  England’s request to Japan was accepted and German assets in China were attacked and Japan began to set itself up as a colonizing power in China.  India is discussed as well as the British plan for a Jewish Homeland.   It was during this year that Latin American countries joined the allies, mostly in word over deeds.  Greece, Siam, and China would also join the allies in 1917.  The European war became a world war.

1917 is a well-written history that goes deeper into World War I than most histories since it concentrates on a single year, although a pivotal year.  1917 set the stage for the war’s end and the uneasy peace to follow.  It examines the many misconceptions that the warring countries held to and the belief that a decisive victory could be won.