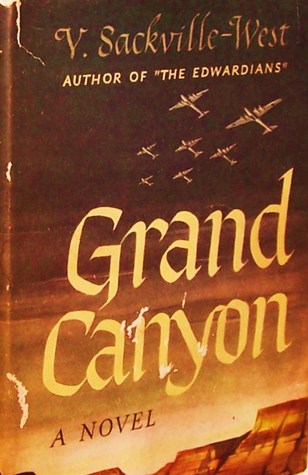 Grand Canyon: A Novel by Vita Sackville-West is the author’s only science fiction novel. Vita Sackville-West was a British poet, writer, critic, and gardener. She is well known for her affairs with women while married to British diplomat Harold Nicholson. She traveled widely and to many places where white women usually did not venture. Her fiction and her life intertwined in much of her writing.

Published in 1942 with the Battle of Britain firmly in the minds of the English and war still raging in Europe, Sackville-West writes of A Nazi-controlled Europe and peace between the US and the Reich. British exiles are staying at a hotel at the Grand Canyon and they mix with the Americans. Lester Dale and Helen Temple, both British, are the lead characters. Strangers at first they become closer reminiscing about their lost London.

The descriptions of the canyon are wonderfully done and play polar opposites to the destruction of war. The Indian civilization and the wonder of nature compete with the manmade hotel which tries in a very American way to compliment the scenery with capitalism and artificialness. America itself is seen as big from the description of the canyons dimensions to the towers in New York. Its geographical isolation has lead to a youthful acting, fun-loving population isolated from Europes fighting. The American people and military remain innocent in the idea of total war.

The German betrayal of the treaty with America comes as a complete surprise to the United States (much like the invasion of the Soviet Union in 1941). The war and attack are portrayed as evil. There is a far greater evil in the world than Hitler alone; he merely personifies it. The contrasts are clear: nature and war, innocents and evil. The book, however, does not age well. Much like how the 1984 movie Red Dawn seems ridiculous today (and maybe back then too), the Nazi invasion of the US is far fetched and the invasion goes as smoothly as for the enemy as Red Dawn. By the time this book was published, however, the US had already declared war on Germany.

Sackville-West writes an interesting alternative history with a few surprises in people and the plot. As for the science-fiction, it is there, late in the story, and is subdued. Sackville-West is concerned with the writing as much as anything else in the story. It seems old and decades behind the contemporary writing of the time. It’s formal and much of the action is conveyed in the writing style, conversation, stiffness, and plot. Perhaps what one would call “very English.”

I enjoyed it from the historical perspective of a writer writing war fiction while a war was raging in Europe and her home country the victim of air raids on a scale not seen before. Much of this shows through in writing about the sirens and the bombing in America. A cautionary tale is what she calls it, but perhaps it was meant to be more shock and awe to the American public.