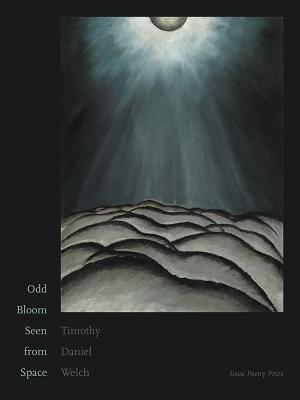 Odd Bloom Seen from Space by Timothy Daniel Welch is the Iowa Poetry Prize winner for 2016. Welch’s poetry may be found in journals such as Rattle, Arts & Letters, Best New Poets, Green Mountains Review Online, and elsewhere. He lives in Tallahassee, Florida.

An odd bloom was the description used by Frank Culbertson to describe the debris cloud he saw when looking down on Manhatten from the International Space Station on 9/11/2001.  The title poem is tucked away in the middle of the collection and the poet reflects on the “odd blooms” in his own life.  The collection takes an autobiographical tone and the reader can see the “odd blooms” throughout the poet’s life.  These odd blooms are moments captured when something remarkable happens that one is not sure how to process without more information or time or just some little bit of information or experience that sticks with one for a lifetime.  One odd bloom could have been Bolero.  The poet titles the second section, and a poem, after the movie or at least what that movie meant to him as he remembers his illicit viewing of the movie and its influence later in life.

The poet looks back at life and the people in it from memories of an old girlfriend who worked at a 1950s themed diner to an eccentric friend named Frank.  There is a merging of old Greek gods and the Christian one mingling is well seen in “To Laura — A Virgin Unwed.”   The poet also dates himself in his work with not only Bolero but Michael Jackson’s Thriller. “Owls,” a more disturbing piece, makes the connection with the past and current:

Owls and their Michael Jackson
hooting in the trees, eyes

snow-burned with light, predators of the very
small, and fluttering like
Michael Jackson in his castle for children—

Welsh captures a nostalgic feeling for the past and things in the past that changed him or managed to stick with him through life — Family, friends, events, tradition, and even pop culture.  In a longer poem “Working for My Father” ties the ancient, the near past, family, and what we see together nearly perfectly.  A well-done work deserving of the Iowa Poetry Prize.