Poetry Review — In Praise of Defeat: Poems of Abdellatif Laâbi 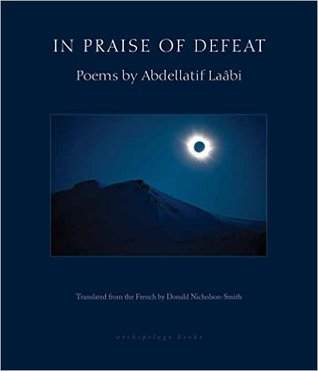 In Praise of Defeat: Poems of Abdellatif Laâbi by Abdellatif Laâbi is an anthology of the poets work from 1965 through 2014. Laâbi is a Moroccan poet, born in 1942 in Fes, Morocco. He is one of the founders of the artistic journal Souffles. It was considered as a meeting point of some poets who felt the emergence. It was banned in 1972, but throughout its short life, it opened up to cultures from other countries of the Maghreb and those of the Third World. Laâbi was imprisoned, tortured and sentenced to ten years in prison for “crimes of opinion” and served a sentence from 1972-1980. He was, in 1985, forced into exile in France.

Here is a man who was a revolutionary with the pen instead of the gun. His work not only landed him in prison, but he continued to write while imprisoned. Of all the poems in the collection, the poetry from his imprisonment is the most powerful. He writes of the torture of the innocents and yet he writes of the prison torturer as a person who wonders if he can support his wife and five children and how much food prices will rise and what the late rains will so. He is a normal man until he starts his job.

Write, write, write is Laabi’s message from prison even though that is exactly what put him in there. Write in a cell 1.3 meters by 2.3 meters which part is blocked by a concrete bed. A small window, a squat toilet, and iron door with a sliding slat, and the luxury of a small wooden shelf make up the poet’s world. It is a dismal life even without a trip to see the torturer. Yet, from this existence, the writing gains strength:

Then we started to talk as the world around us became more real, as poetry made us more human, as our people by virtue of its struggles provide us with a livable nation, and as we ourselves awoke to the meaning of commitment.
“Chronicle of the Citadel of Exile”

From the 1993 collection The World’s Embrace “The Poem Tree” tells of the extinction of poetry:

From time to time the memory of men gets saturated. At that point they jettison the most cumbersome and make room for the novelties that so infatuate them.

He compares poetry in the modern world to a tree unable to move, but resilient to efforts to manipulate it. The tree provides different fruits in different seasons — some sweet and others venom. It protects itself from predators with its own thorns. But unlike the novelties of the world, cell phones, gaming consoles, and video entertainment on demand, this is living breathing art that has set its roots and fights to survive in the world.

Laâbi work is in the original French on the left side of the book and English on the right. Donald Nicholson-Smith does a superb job of translating the work to English. I can not vouch for the structural portion of the translations, but in relaying the message, art, and the emotion of the original it would be difficult to find any better translation. Without this translation, Laâbi’s work would most likely not have an English speaking audience. A great collection of poetry and struggle lasting over fifty years. It remarkable that in the modern world that such repression can be fought and exposed with poetry and not violence.