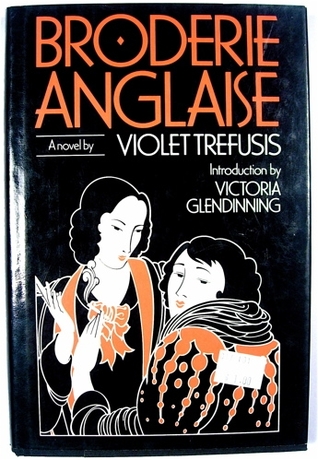 Broderie Anglaise by Violet Trefusis is the fictionalized portrayal of a love affair between the author and Vita Sackville-West. Trefusis was an English writer and socialite. She is chiefly remembered for her lengthy affair with the poet Vita Sackville-West, which the two women continued after their respective marriages to men. Trefusis wrote novels and nonfiction works, both in English and French. This novel was published in French in 1935. It has only recently been translated into English.

I started reading Virginia Woolf, which led me to Vita Sackville-West and she has taken me to Violet Trefusis. The Vita Sackville-West — Virginia Woolf affair is well known, but before that affair, Vita took to Violet Trefusis in a relationship that lasted a lifetime. Vita wrote about her affair with Violet in her book Challenge and later in her journal which was published by her youngest son as Portrait of a Marriage. There are, of course too, the letters Violet send to Vita but the letters Vita send back were all destroyed by Violet’s husband, Denys. Vita’s and Virginia Woolf’s relationship has been preserved in letters and diaries which have all been published. Broderie Anglaise is Violet’s version of events and her characterizations of the people involved. John Shorne is Vita, safely taking a more socially acceptable male form. Lady Shrone is Victoria Sackville-West played out in hyperbole. Alexa is Virginia Woolf who Anne (Violet) is meeting. An actual meeting Virginia and Violet did take place in real life.

This book would probably be of little interest or value to a reader not familiar with the setting who might simply dismiss it as a mediocre novel. There is nothing stellar about the writing or the story — Two women who competed for the same man, who was controlled by his mother. The story comes to mean more when the characters are known. If anyone has read Portrait of a Marriage or the letters Violet wrote to Vita, the story and it characterizations become clear. Violet was a very emotional person and it is reflected in her letters in the form of passion and mocking when her passion was not returned. Broderie Anglaise is Violet’s last bit of bitterness and revenge on both Vita and Virginia Woolf. Vita and Violet remained friends for life but things never returned to the passion of the earlier years. That is perhaps one reason this book was not published in English until recently. Nigel Nicholson (Vita’s son) waited until both Vita and Violet had died before publishing Portrait of a Marriage perhaps this was Violet’s thinking in keep the book in French, although Vita did speak French. Their affair inChallenge was fictionalized and there too Vita played the male role, but it also remained unpublished for fifty years for fear of a scandal.

For those interested in Vita Sackville-West this book does hold some value. Trefusis has shown in her letters just how emotionally driven she was and it reflects well in this novel as the characters outside of Anne (Violet) are but caricatures of their real selves. Violet could hold a grudge and it shows. It would seem that she believed that she and Vita should have been together and it was those surrounding Vita poisoned their relationship. Broderie Anglaise is perhaps better viewed as a study of Violet Trefusis’ psyche than as a novel.