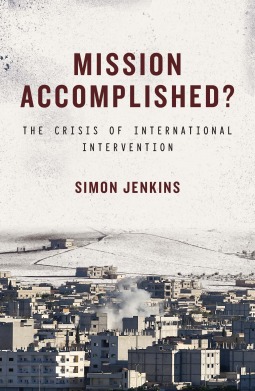 Mission Accomplished? by Simon Jenkins is a look at Britain’s changing role in international military and humanitarian actions. Jenkins is the author of the international bestsellersEngland’s Thousand Best Churches and England’s Thousand Best Houses, the former editor of The Times and Evening Standard and a columnist for the Guardian. He is chairman of the National Trust.

Jenkins opens with the British plan to rescue a handful of British citizens caught in unrest in Sierra Leone. As it turned out those being rescued, didn’t want to be and were used to the cycles of unrest. Not to make the rescue mission a total loss, the troops became part of a humanitarian aid program that has spiraled out of control and lasted ten years. It seems nations never learn, Instead of backing down, they find ways to extend their stay to the point it is hard or nearly impossible to leave — much like the US in Iraq.

Mission creep and perhaps forgetting are all problems. The US invaded Afghanistan after 9/11 as a punitive measure. The idea to capture and defeat Al-Qaeda had great worldwide support. The world expressed sympathy at to the US including Iran. Iraq and North Korea were the only silent nations. With support to hunt down bin Ladin and Al Qaeda the US lost interest in 2003 and invaded Iraq. The US left Afghanistan to Britain.

The concept of precision bombing is brought up also. Today we think of it as very precise and it is compared to Dresden. The bombing raid on Libya, intended to kill Gaddafi, failed to kill him, but killed others including Qaddafi’s daughter. We watched footage of smart bombs guided down into air shafts and thought was was clean and precise. The “precision” of smart bombs and cruise missiles would seem to indicate that less would be used and only military targets would be hit. The fact is friendly fire and civilian casualties remain high. Shock and Awe was meant to terrify the civilian population. In fact in 2003, there were 2,300 civilian causalities as a result of the US lead coalition bombing.

Interventions also seem to taint our memories. The US failure in Somalia and British involvement in Sierra Leone kept these powers out of major humanitarian interventions such Rwandan genocide and Sudan. Failure to intervene is not the only problem but also criticism of success plays a role too. The first Gulf War was a success. It kept to the mission parameters and did not leave a vacuum. The later removal of the Iraqi government, its military structure, and its bureaucracy removed the entire talent pool and left no one with experience. Besides the removal of the talent, it also left those with military experience and knowledge out of work. A similar situation happened in Somalia when the government cut funding to the navy. The sailors became fishermen keeping with what they knew. When the government opened fishing to international trawlers, the former navy men were out of a job again, and in response turned to piracy.

Jenkins gives the reader a detailed look at primarily British intervention and the reasoning behind it. We see the mistakes in hindsight, but even so there was plenty of hindsight before more many recent interventions. We like to think we learn from history and do not repeat previous mistakes. Jenkins shows that we believe in out military missions and that they are not repeats of the past. Yet we are very selective in where and when we involve ourselves and many times our choices simply wrong. Jenkins takes us back to see his decisions at the time and how his opinions have held out. A very interesting perspective.